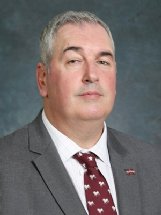 Having been an FCS coach for four years at Fordham University in New York City, Moorhead's squads defeated Army and Temple -- finishing his tenure in New York City 2-2 against FBS competition.

Needing wins in its final two games to reach the six total victories needed for bowl eligibility, the Bulldogs sit in a precarious situation entering the season's final weeks. That said, Saturday should serve as an opportunity for Moorhead to get some snaps out of his eligible freshmen.

"If the game situation dictates it -- and particularly on special teams -- we're going to try and get those guys some game experience," he said.

While the biggest injury news of the day Saturday involved Alabama quarterback Tua Tagovailoa, MSU received some dire news of its own.

Speaking with the media postgame Moorhead announced junior safety C.J. Morgan will miss the remainder of the season with a lower body injury.

With Morgan now sidelined the rest of the way, the Bulldogs will turn to a youthful contingent of sophomore Marcus Murphy and freshmen Shawn Preston and Collin Duncan.

Murphy, who has been in and out of the lineup due to suspension all season, has been a bright spot when in the lineup -- returning an interception for a touchdown in a Nov. 2 win over Arkansas -- though his status remains up in the air.

As for Preston and Duncan, neither has played a major role this season but Moorhead mentioned both by name as potential replacements for Morgan.

Junior running back Kylin Hill may lead the SEC in rushing, but that doesn't mean he can't make more of an impact.

After Hill caught three balls for 21 yards against Alabama -- one of which was a diving, 19-yarder that set up MSU's lone score of the day -- Moorhead was asked Monday on whether there has been a more conscious effort to get the Columbus native more involved in the passing game.

He went on to explain the Crimson Tide offered few, if any, looks at one-on-one coverage, though the WILL linebacker would often line up on the running back -- a matchup the Bulldogs hoped to exploit.

Further, while Hill's total receptions (13) have dipped from last year's total (22) -- in part due to his increased workload running the ball -- Moorhead is hopeful to get the ball in his hands more frequently.

"Certainly with Kylin or a player of his ability, we want to get him as many touches as we can -- whether it be by handoff or by throw," he said. "So if there's instances in the game plan where we can get him out in space and get him the ball with receptions -- any time he has the ball in his hands it's a good thing."

Hill and senior receiver Deddrick Thomas were both limited participants in practice Sunday after sustaining upper and lower-body injuries, respectively.

Moorhead said he expects both to be full-go in Tuesday's practice and for Saturday's game.