Analysis: Where does Mississippi State stand under Joe Moorhead? 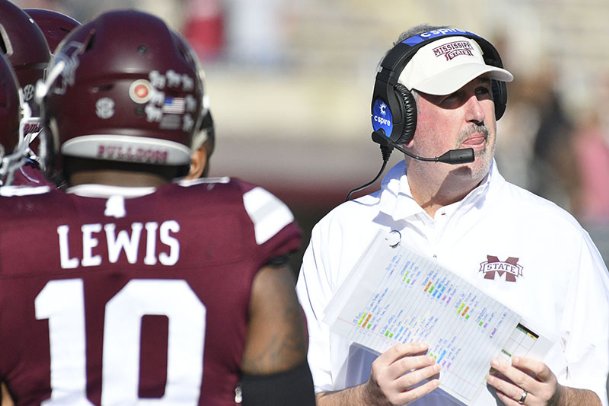 STARKVILLE -- As Mississippi State coach Joe Moorhead addressed the media following Saturday's 38-7 loss to Alabama, there was an heir of familiarity in his postgame sermon.

For the third time this season, MSU was outplayed, outcoached and flat out beaten against another of the conferences elite.

"At the end of the day, we didn't coach or play well enough to beat a team like Alabama," Moorhead said.

While some will note the injuries and suspensions that have plagued this year's squad as a means of solace, Moorhead's script has become repetitive -- drawing more eye rolls than inspiration of late. Now sitting at 4-6 and 2-5 in Southeastern Conference play, it's worth positing -- is MSU regressing?

After an 8-5 inaugural season in which the Bulldogs boasted the best defense in school history, Moorhead's squad was expected to take a few steps back with the losses of NFL first round picks Jeffery Simmons, Montez Sweat and Johnathan Abram. It wasn't supposed to be this steep a drop.

One season after ranking as the nation's No. 1 defense, the Bulldogs sit a middling 69th nationally and 11th in the SEC. Further, the stout run-stuffing defensive front fans watched dominate a year ago has turned into a unit that is allowing 161.7 yards per game on the ground.

While the talent suck on defense is as much to blame for the on-field results as anything, MSU's offense has remained an issue. Despite bringing in Penn State transfer quarterback Tommy Stevens -- whose noted knowledge of Moorhead's system would supposedly propel it to new heights -- the Bulldogs sit 110th nationally in passing offense -- up just two spots from last year's final mark of 112th.

The Bulldogs have thrice been run off the field by the SEC West's elite -- losing to Alabama, LSU and Auburn by a combined score of 130-43. The Bulldogs were also wholly handled by Texas A&M -- the fourth-best team in the West -- 49-30 on Oct. 26.

It was also the second time MSU slogged through a game coming off a bye week after they were handled by a Tennessee team that sat at 1-4 with losses to Georgia State and BYU before beating the Bulldogs 20-10 on Oct. 12.

"There's a lot of things we have to do from an entire program standpoint to cut that gap on and off the field," Moorhead said of how MSU can compete with the top of the conference. That's what we're working towards every day -- to bridge that gap."

And while MSU has continued its spiral, the team's postseason aspirations remain attainable. The Bulldogs should be favorites over Abilene Christian and in-state rival Ole Miss in the season finale. Wins in both contests would send the Bulldogs to a bowl game for a record 10th-straight season and a chance to get to seven victories. But a loss would further perpetuate the downward trajectory of the program.

"There's still a lot of confidence knowing that we control our own destiny in winning six games," junior linebacker Erroll Thompson added. "We've just got to win out. It's a big task ahead, but we can do it."