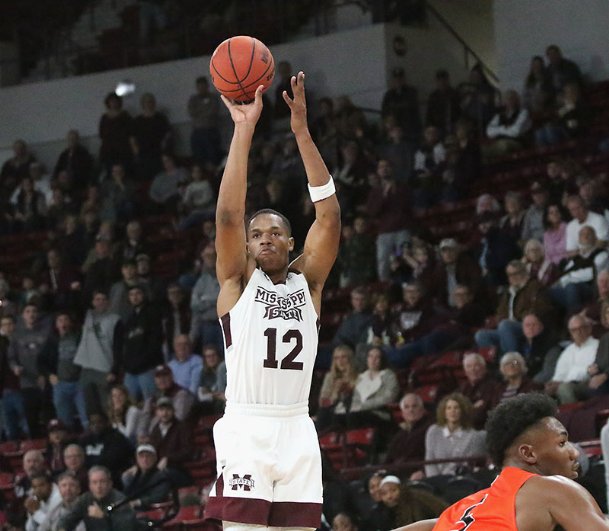 With 14 minutes remaining in the second half, Mississippi State found itself trailing by 18 to Sam Houston State. The Bulldogs couldn't buy a basket and added insult to injury by turning the ball over at will.

MSU coach Ben Howland had seen enough and called a timeout. That's when the Bulldogs rallied.

"I'm really proud of the way they fought back," Howland said. "They never quit."

While one side felt jubilation at the buzzer, a more somber vibe found the visitors' locker room.

Sam Houston State was no slouch, coming off a 21-12 season, but the Bearkats racing out to a 34-17 lead with three minutes before halftime shocked many in Starkville. MSU responded with a 10-0 run to cut the lead to 34-27 entering the break, but the Bulldogs gave the ball away 16 times in the first half.

"(Our coaches) emphasized avoiding turnovers a lot in practice leading up to the game," MSU guard Tyson Carter said. "It's gonna be rough in practice."

None of the momentum from the late first half run carried over, as Sam Houston State punished MSU for countless mistakes, taking a game-high 18-point lead with 14 minutes remaining.

"They pressured us and the way they scouted us, obviously they watched that FIU game," Howland said. "We did not handle the pressure well at all."

Sam Houston State led by 11 points with six minutes to go in the contest, but the Bulldogs trimmed the deficit to four with two minutes remaining. Perry forced himself to the free-throw line, and made one of two shots, but MSU center Abdul Ado snagged the offensive board and found Carter in the right corner.

Carter connected on a wide-open 3-pointer, tying the game at 58 apiece and sending the 6,255 fans in attendance into a frenzy. Carter, rotating between point guard and shooting guard, finished with 28 points and played all but 26 seconds of Friday's contest. He also chipped in six assists.

"It's never fun for the coach, but it's fun for everyone in the stands to have a comeback win," Howland said. "That makes it exciting."

After a stop, Columbus native Robert Woodard II hit the biggest shot of the game, a go-ahead long-range shot at the 59-second mark that gave his team a three-point lead it wouldn't relinquish.

"When the 3-pointer went in, it was just a sense of relief in a way," Woodard said.

MSU eventually won by nine points after Perry threw a slam dunk down as time expired, causing a small skirmish to break out between the Sam Houston State and Mississippi State benches. Howland later explained Perry wasn't trying to rub the win in the Bearkats' faces. The forward thought MSU was up eight and was trying to give the Bulldogs a double-digit win, which would have helped the team's NET rankings.

"That's probably partly my fault," Howland said of the skirmish. "... When you're a one-bid league, you don't necessarily know that because there's only one team coming out. When you're in a multiple-bid league, those little things like how much you win by (matter)."

Perry finished with a double-double with 10 points and 14 rebounds but committed seven turnovers.

"He'll be fine," Howland said. "He needs to understand this, every single player and team he's playing against is focused on him."

Redshirt freshman D.J. Stewart gave MSU a huge spark off the bench, finishing with 15 points on a 5-of-9 shooting effort. Woodard finished with 10 points and five rebounds. For the second straight game, forward Prince Oduro played less than three minutes, meaning the Bulldogs were essentially seven deep on Friday.

"We have to get more out of our bench," Howland. "We're going to work on that. We have to play more than six or seven guys."

New Hope graduate and East Mississippi Community College transfer Terryonte Thomas made his return to the Golden Triangle and scored four points in 19 minutes of action.

The Bulldogs shot 50 percent from the floor and held Sam Houston State to 36.9 percent to go along with a 41-28 rebound advantage.

With the win, MSU extended its streak of home nonconference victories to 24, the longest active streak in the SEC.

MSU is back in action against Louisiana-Monroe at 6 p.m. Thursday at Humphrey Coliseum.