Heritage Academy runs away from Leake Academy in MAIS second round 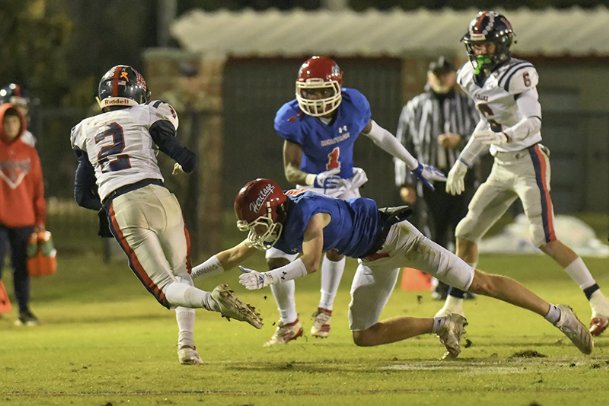 On a night that Heritage Academy honored its 1986 undefeated state championship team, the 2019 version of the Patriots continued their unblemished run through the MAIS 5A state playoffs with a win over 35-0 win over Leake Academy.

Battling early winter temperatures that dipped into the 30s and a well prepared Rebels squad, the Patriots mustered just 14 points in Friday's opening first half.

Heading into the locker room, coach Sean Harrison and his staff didn't lecture their squad on the sluggish play. Rather, he encouraged his bunch to remain focus and finish. Finish they did.

Finally garnering some run support from senior running back KJ Smith -- who finished the day with 88 yards on 11 carries -- Heritage raced to 21 third-quarter points to put the clamp down on Leake.

"If they started blitzing we could start picking apart their defense," senior quarterback Carter Putt said. "That's what we did in that second half, and we pretty much stepped up to a whole other level."

Fighting through the nippy conditions, quarterback Carter Putt anchored a Heritage Academy offense that averaged just over a 28-point margin of victory in every game this season in Friday's contest.

Putt -- who finished the night 15 of 20 for 203 yards -- delivered the first of his four passing touchdowns on a lofted ball toward the back left corner of the end zone. Tapping the ball up, senior wide receiver Jared Long swiped the pass over a Rebel defender for the night's opening touchdown.

The duo would go on to combine for three passing scores on the night.

While it was Long's athleticism on display on his first passing touchdown, Putt flashed dynamic ability of his own as he fled a Leake Academy defender toward the end of the second quarter.

Racing to his right, Putt fluttered a pass toward the back-center of the end zone and into the hands of junior receiver Sam Hannon as his knees were just a mere inches off the ground.

"It's a lot tougher," he said of throwing in the cold. "You've just got to stay warm. All I did was go on the sideline and just keep throwing to stay warm to keep my arm loose."

And while the on-field celebration persisted, the underlying sentiment remained. If the Patriots hope to reach the immortality of the '86 team, the job has yet to be completed.