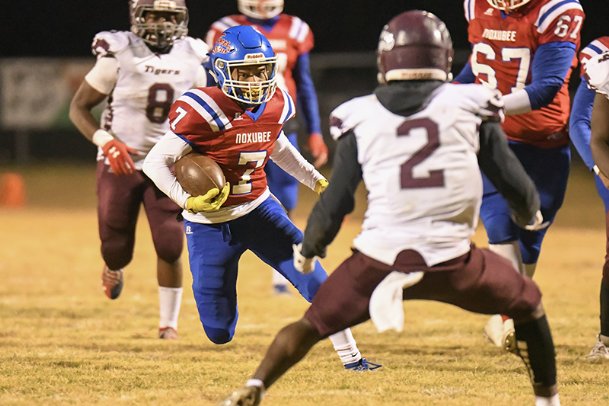 MACON -- On the first play from scrimmage of Friday's MHSAA Class 3A playoff game in Macon, Noxubee County junior defensive lineman Travorus Hatcher busted through the middle of the Coahoma Agricultural offensive line and jumped on senior running back Markevious Brown for a 1-yard loss.

The rest of Friday's game looked about the same: Noxubee County pouncing on its visitors in every way, shape and form.

The Tigers returned two interceptions for touchdowns, running back Bobby Shanklin had four touchdowns in the first half alone, and Noxubee County dominated its way to a 53-0 victory in Friday's first-round game.

"They've been playing great the last couple weeks, and they got that goose egg up there," Noxubee County head coach Teddy Young said. "Offense, we got clicking. The running back got going. Everybody's locked in, and we're playing good ball right now."

Young said Wednesday his defense is among the best in Class 3A, and the Tigers backed him up Friday. Defensive back Zack Andrews had a 60-yard pick-six two plays after Hatcher's emphatic opening, and linebacker Kevarious Harris ripped the ball away from a Coahoma receiver for a 36-yard pick-six in the third quarter.

"They watch the film," Young said of the two playmakers. "They're locked in to the game plan. They were in the right place at the right time to make those plays just because they put in the time all week."

Harris' return touchdown produced Noxubee County's final points of the game, as a running clock for the entire second half limited scoring chances. With a 40-0 halftime lead, that was just fine for the home team, which didn't know how lopsided Friday's game would be.

"I was just expecting to get a win," senior quarterback Marlon Windham said.

Windham and the Tigers got more than that -- they got a statement as they prepare to face Senatobia on the road next week in the second round.

Young is looking forward to the matchup, a rematch of a second-round playoff game he coached as a Noxubee County assistant.

"We'll watch film on them, and we'll come up with a great game plan," he said.

If it's anything like the game plan he drew up Friday, the Tigers should expect plenty of success.

Noxubee County's offensive line opened up holes all game for Shanklin to run through, and he took advantage. He had a pair of 10-yard touchdowns in the first quarter, scored from 5 yards out early in the second and shook off multiple Coahoma defenders on his way to a 59-yard touchdown run from the Wildcat formation with 1:11 to go in the half.

Shanklin's breakout game helped soothe the sting of a rough start to his junior season.

While he had a huge game, he wasn't the only beneficiary of Noxubee County's potent rushing offense. Sophomore tight end Demond Cunningham ran for a 4-yard touchdown a couple minutes into the third quarter. Even Hatcher got a short rushing score in the first half, powering his 6-foot, 265-pound frame into the north end zone.

"We were just running down their throats," Windham said.

But the Tigers' defense delivered arguably just as impressive a performance, posting its first shutout since back-to-back zeros against Louisville and Columbus to start the season.

"We're gonna lean on our defense to make this run to the state championship," Young said.

The Tigers will need an encore -- or something close to it -- against Senatobia, which piled up the points en route to a dominant 44-7 win of its own Friday.

But for now, Young and Noxubee County will take a minute to reflect and rejoice.

"We're gonna enjoy it for the night," Young said. "Next week, we're gonna lock back in and focus on Senatobia."