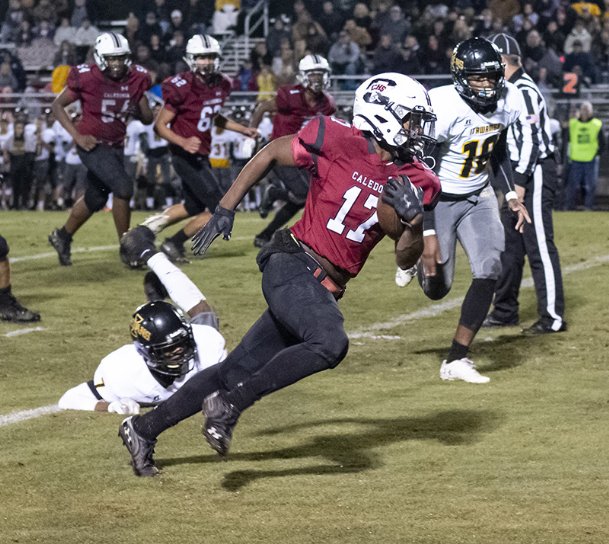 Caledonia fullback Darquez Williams breaks free for a long run against Itawamba on Friday, Oct. 1 in Caledonia. Photo by: David Miller/Special to The Dispatch

The Caledonia football team is playing for its first playoff win in school history Friday, but the record would just be an added bonus for coach Michael Kelly's team.

"You try not to look at it that way," Kelly said. "We're just trying to look for a way to play another week of football. ... We're gonna play well, and I guess if we do something in school history, then that'd just be an extra thing on the side."

Kelly knows the Confederates will have to play their best game of the season against perhaps the toughest opponent they've faced this year. Caledonia (5-5) travels to face Corinth (9-1), the No. 3 team in Class 4A.

"You watch them on film, they don't have many weaknesses," Kelly said. "They've got a senior-led group of football players that have all played together since they were freshmen ... They find ways to get them the ball in space and force us to be disciplined and get lined up on defense."

"We need to take care of the football better than what we have the last couple weeks," he said. "We can't afford to lay it on the ground. We can't give it to the other team. They're gonna get plenty of opportunities on their own."

Against a Warriors offense that averages 42.3 points per game, the 'Feds' linebackers and safeties will have to pick up their game.

"I feel like we need to play better on defense the next couple weeks than what we have the last couple weeks," Kelly said. "We need people like Darquez Williams and Dillon May to start stepping up and making more plays like they were earlier in the year."

"We're gonna find a way to get it to them and let them do what they do," Kelly said.

Kelly, who knows Friday could be the final game for his seniors, is hoping Caledonia can play well enough to extend the season one more week.

"You hate to lose them, hate to see them go, but that's why I hope we play well, and hopefully we'll get another chance to let them play again next Friday," he said.

If Columbus (3-7) can pull off a road win Friday at Saltillo (1-10), the Falcons would finish the season with twice as many wins as they've had in the past two seasons combined.

"Their record doesn't dictate how good they are," Pulphus said. "Saltillo's a pretty nice team."

The Tigers have some excellent athletes at receiver to lead a pass-happy offense, something Columbus doesn't see often. On defense, Saltillo flies to the football like any good team.

Regardless of whether the Falcons' season ends with a win or a loss Friday, Pulphus said it's been a "bittersweet ending."

"The seniors have been working hard, and it's kind of hitting them right now that this is it," he said. "It's been sad. They know the amount of work they've put in, and this is it."

But that sadness, Pulphus said, shows his team has truly bought in -- a promising thought at the end of his first season as head coach.

Things are starting to click in Starkville. Winners of eight straight games dating back to Sept. 13, the Yellow Jackets wrapped up the MHSAA Class 6A, Region 2 title with a 50-24 win over Warren Central last week.

With Starkville sitting at 9-2 heading into this week's matchup against Clinton (5-5), it's the Jackets' offense that has shouldered the load of late.

Behind the play of junior quarterback Luke Altmyer, who picked up an offer from Louisville this week, the Yellow Jackets have scored 49 or more points in three of their past four games. In those three games, Altmyer is a combined 53 of 77 for 684 yards and 10 touchdowns.

"I think we're just getting better," coach Chris Jones said. "Early in the season we were young. Had a lot of kids that hadn't played a lot of football, and I always feel like the more you play, the better you get -- and I feel like it's at that point."

With the offense rolling, Jones is hoping his squad can ride the momentum it has gained over the past two months through season's end and into the postseason.

"Yes, we've won district, but you want to go into (the playoffs) clicking on all cylinders, and you want to have some confidence," he said. "I don't care what phase you're at in the season; it sucks to lose. So we're not going to try to lose this game or try to sit guys to save them for next week. We're going to play like you should play."

Starkville Academy coach Chase Nicholson knows his team can't live in the past.

The Volunteers made a miraculous comeback last week at Magnolia Heights, scoring 28 points in the fourth quarter to eke out a 35-30 win on the road in the playoffs. That won't fly this week at No. 2 Lamar, Nicholson said.

The Vols have been focused on facing the Raiders in Meridian ever since Sunday, Nicholson said.

"We have to put last week behind us, have to move forward," he said. "We've just gotta focus on Lamar and get ready to play them."

Nicholson knows Lamar is a proven team in the playoffs, and that leaves the Vols with a big challenge Friday.

They're a great football team," he said. "That's why they're No. 2 in our division. That's why they got a bye week the first week. ... They know how to win and get it done and how to play late in the playoffs."

The Vols will have to play their best in all three phases of the game to have a shot at a major upset, Nicholson said.

"We've got to come out and we've got to play our best game again this week and take care of business," he said.

Columbus Christian Academy has found success all season in its first year in MAIS Eight-Man football.

The Rams are 8-2 and received a bye week in last week's first round of the Class 2A playoffs, and their playoff opener is Friday against Riverdale Academy (Louisiana). Head coach Jason Williams said the Rams' formula for a win Friday is the same as it's been all year.

"Execute our game plan and what we need to do and get after the football on defense," Williams said.

"Sizewise they're similar to us, maybe quicker," Williams said.

Still, Columbus Christian's success this year shows the Rams have the talent to pull off a win Friday on its home field.

New Hope coach Wade Tackett knows how important a victory Friday against Grenada would be.

It would give the Trojans something to build on and carry with them headed into the offseason, Tackett said, and it would be the perfect way to send off New Hope's senior class.

"I'm sure it'll be emotional," Tackett said. "I expect them to play hard and go out the way they want to go out and come out with the victory."

The Trojans have no playoff aspirations, so Friday's game is it -- and it's the New Hope underclassmen who seem most adamant to win it.

"The underclassmen want to win it for the seniors, because they're gonna want that returned whenever they're seniors," Tackett said.

To get the victory they want, the Trojans will have to deal with a well-coached, physical team that can break big plays on offense. So it'll be the New Hope defense trying to defend its home field one final time this season.

"We're gonna play our defense, try to get them behind the chains and just try to lay it out on the line for senior night," Tackett said.

West Lowndes has already been treating the second half of its regular season like the playoffs, so the Panthers see Friday's road game at Tupelo Christian Prep in Belden as a de facto postseason contest.

The Eagles are good enough to be a playoff team, West Lowndes coach Anthony King said, and Friday's game will basically determine who gets the No. 3 seed in Class 1A, Region 2.

"They are very motivated," King said of the Panthers. "We were off last week, so the guys were extra motivated to get back on the field and try to get that third seed."

With a win, West Lowndes will finish third and face Baldwyn on the road -- an ideal matchup, King said, as TCPS and Baldwyn are very similar teams that run pass-heavy offenses.

"It's a good test, because Tupelo Christian pretty much is a playoff team," King said. "Pretty much a playoff game."

The Dispatch's Ben Portnoy contributed to this report