MSU women to open season with plethora of talent, inexperience 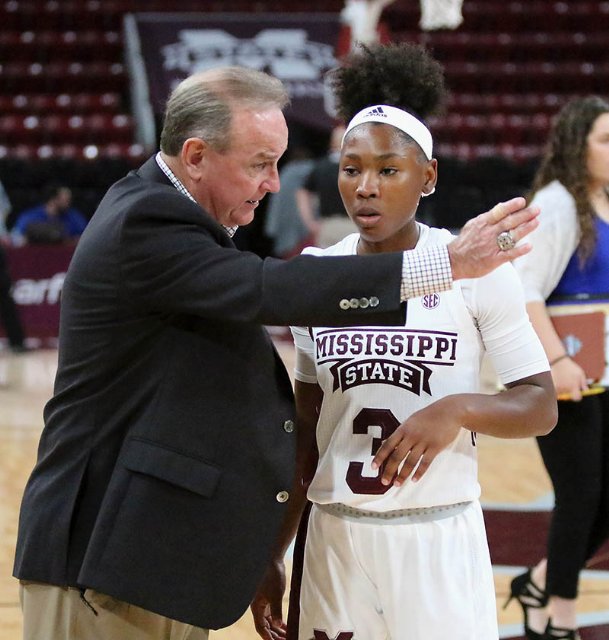 Using his systematic approach of circles and squares to indicate which stats he liked and which he didn't, Schaefer occasionally muttered a few nods to the piece of paper as gathered reporters looked on.

"They had four points in the paint in the second half, y'all," he said fidgeting with the paper before him. "They had 24 in the first half. Much better job I thought defensively."

While the No. 10 Bulldogs eventually raced past the defending Division II national champion Chaparrals, Schaefer remained steadfast in his incessant attention to detail as the Bulldogs begin regular season play Saturday against Southern Miss.

With a slew of new faces coupled with the departures of all-time MSU greats Anriel Howard, Jazzmun Holmes and Teaira McCowan -- the No. 3 overall pick in the 2019 WNBA Draft -- Schaefer and his staff have plenty to decipher when it comes to this season's squad.

With McCowan now averaging almost a double-double per game for the Indiana Fever, it will be a combination of sophomore Jessika Carter, junior college transfer Yemiyah Morris and Ole Miss import Promise Taylor replacing her production.

Carter, who showed flashes of brilliance during MSU's tour of Italy during the World University Games this summer, was downright dominant Monday as she totaled 27 points and 13 rebounds in 29 minutes of action -- finishing the night with a game-high plus-minus rating of 27.

"She is so athletic and agile and she can really do some things -- it's just convincing her sometimes," Schaefer said. "Her battle is between her ears in realizing 'I can be everything he thinks I can be' because I think she can be a monster."

Alongside Carter, Morris and Taylor figure to be more rotational pieces, at least in the early going. Morris comes to Starkville following a standout career at Cochise College in Arizona, where she averaged 13.9 and 8.7 rebounds per game her sophomore season, while Taylor is regaining her previous form after an ankle injury ended her 2019 season.

At forward, Bibby and freshman Rickea Jackson should shoulder a heavy scoring load. Bibby, who is coming off a season-ending knee injury, shot 40.2 percent from three-point range in 2019 and scored double digits in 14 of her 17 contests last year.

As for Jackson, she comes to MSU as the program's first McDonald's All-American signee and the No. 6 overall recruit in the class of 2019. A dynamic playmaker who can slide in anywhere from shooting guard to power forward, Jackson has the potential to be an SEC Freshman of the Year candidate by season's end once she finds some consistency.

"I think sometimes she's trying to draw the foul," Schaefer said of Jackson. "She just needs to go up and finish, stop worrying about drawing a foul and just go up and make a layup."

Though the MSU frontcourt will be a work in progress, its backcourt figures to be a strength -- albeit over time.

Senior Jordan Danberry was unexpectedly granted an extra season of eligibility Aug. 20 and should serve as the lead guard in Schaefer's offense. A preseason first team All-SEC selection, Danberry averaged 13.1 points, 3.5 assists and 3.4 rebounds per game in a more complementary role.

In Holmes' place, redshirt sophomore Myah Taylor will take over the point guard duties after playing sparingly last season. Taylor, who appeared in 34 games last year but averaged just 11.2 minutes per game, showed a propensity for playmaking in Monday's game as she finished the night with eight assists to no turnovers.

"With Jordan coming back, having that extra person that has played in the SEC for so long, that knows the ins and outs, that works every possession, that voice beside me gives me confidence," Taylor said.

Espinoza-Hunter, a one-time Connecticut transfer, offered high upside as a 3-point shooter last season after Bibby went down -- finishing the year 16th in the nation in 3-point percentage (42.2 percent).

Mingo-Young, Hemingway and Matharu remain raw as they continue to learn Schaefer's offensive and defensive schemes, though Matharu played some encouraging minutes against the Chaparrals.

"She's been really good in practice breaking people down and splitting the zone," Schaefer said Monday.

"Aliyah is trying to play a position where she's kind of been the off-guard in high school a little bit," he continued. "I've seen her handle the ball and run a team. I really believe that if she'll just listen and buy in a little bit, I think she can play some minutes for us at point."

Following his personal game of tic-tac-toe with the box score, Schaefer was rather forthcoming in his postgame presser. Highlighting the need for game experience and consistency from his youthful group, he conceded this year's team is going to take time to find itself.

"We have a lot of inexperience on the floor and I'm still trying to figure out rotations," he said. "I tried to play everybody and give everybody a chance and so we'll settle it in practice now."