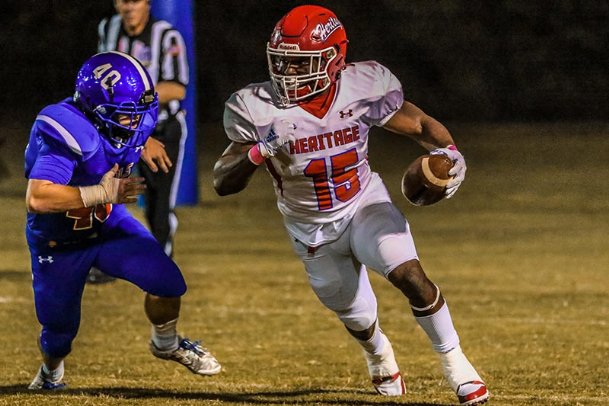 Heritage Academy running back KJ Smith runs for a first down past Starkville Academy defender Gage Johnson during the first quarter on Oct. 18 in Starkville. Photo by: Mike Brown/Dispatch file photo

The Patriots are 11-0, the No. 1 seed in the MAIS Class 5A playoffs. They haven't played a game within nine points yet this season. Their defense hasn't given up 14 points in a single game this year. And their average margin of victory is just over 28 points per game -- yes, Heritage Academy has been better than its opponents by four touchdowns this season.

So as the Patriots prepare for their first playoff game after last week's bye week, Harrison is simply enjoying the ride.

"It's a blast," Harrison said. "It's a lot of fun. This coaching staff, these kids, we've had a really good time this year."

It's easy for Harrison, he said, when he doesn't have to coach effort. His players have taken it upon themselves to play hard each and every week and never seem to let the pressure get to them.

"We preach a lot that leadership should be horizontal, not vertical," Harrison said. "We don't have top-down leadership."

"They've done a good job with embracing that, and they make a lot of corrections themselves before we have to," he said. "The team's done a really good job of coming together and understanding Nov. 22 is the ultimate goal here, and they've really done a good job of focusing in on that."

Nov. 22, just two weeks away, is the date of the state championship game, a contest Heritage Academy expects to be part of. Friday's game against Leake Academy (7-4) will be the first step for the Patriots on the road to Jackson -- a road Heritage Academy is already itching to travel.

As the top seed in their class, the Patriots have had two weeks to get ready, earning a bye week for the first round of the playoffs after finishing the regular season with a 51-0 rout of Washington on Oct. 24.

"It just shows our work pays off," senior wideout Jared Long said. "We've worked very hard this entire season and were rewarded with the bye week. But now we've gotta get back mentally focused. It's the second season. We'll just readjust our minds and get set to go finish it off in the playoffs."

Against Leake Academy, Long and Hannon see the same advantage they've seen pretty much all season: their passing offense, led by senior quarterback Carter Putt. With Long, Hannon and senior Banks Hyde as primary targets, the Patriots have found great success through the air, and there's no reason that trend shouldn't continue Friday.

"They've got good linebackers, but I think our receivers are just good," Hannon said.

With a small roster, those talented receivers essentially double as the secondary -- sophomore Wesley Miller, senior Noel Fisher, Hannon and Hyde form the unit. With Acker and John Jackson on the defensive line and Long and senior KJ Smith leading the way at linebacker, the Patriots' defense has been perhaps more dominant than its offense. Heritage allows just 8.5 points per game and hasn't given up more than 13 points in any contest this season.

In Tuesday's practice, Harrison, running the scout team offense against his defensive starters, noticed the perfect example of the Patriots' speed on defense.

"When we hand the ball off, there's a big hole," he said. "Before they can get to the line of scrimmage, there's four people there."

Heritage Academy will need that kind of speed against Leake senior running back Wyatt Estep, a longtime thorn in the Patriots' side.

"He's one of those guys that I feel like has been over there for 15 years," Harrison said. "I'm kind of tired of seeing him. Ready to see him go."

Estep leads a tricky Rebels offense that will give the Patriots a number of different looks.

"They're always kind of a pain to prepare for because they do a lot as far as formations," Harrison said. "You always have to prepare because they're gonna come out in something new, at least on the first drive."

Harrison knows the Rebels well from prior history between the two teams. Leake was Heritage Academy's second-round opponent last season, as well, and though the Patriots won that game 43-13, they fell to Adams County Christian the following week in the state semifinals to put an end to a strong 10-3 season.

So they know they can't afford to slip up again in the playoffs, where one error could be their last.

"You have to be mentally strong and tough enough to know that that was the regular season and this is the playoffs," Long said. "It's a totally different ballgame. Every team is good. You won't get away with the same mistakes you were able to make in the regular season."

Having that mindset actually helps to reduce the pressure of following up an 11-0 regular season, Long said. All that matters is Friday at 7 p.m.

"We're starting over now," he said. "Your regular-season record doesn't matter, because now it's win or go home. It's 1-0 every week. I feel like we should be fine."