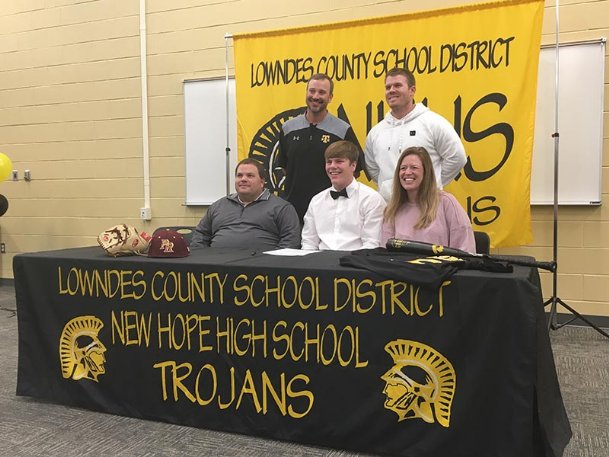 NEW HOPE -- Ryan Burt smiled a little and flexed when the announcement came over the New Hope High School loudspeaker a few minutes before 9 a.m. Wednesday.

A kindly voice reminded every Trojan that they were welcome to spend their 25-minute break in the multipurpose room watching Burt sign to play baseball at Pearl River Community College. Burt, a two-way star for the defending state champion Trojans as well as the quarterback of the football team, was happy for the recognition, but he didn't expect many students in attendance for it.

Dozens of students -- including plenty of teammates from the football and baseball teams -- filed into the auditorium to watch Burt put pen to paper.

"I thought it was gonna be Mom and Dad, head coaches, baseball players," Burt said. "I kinda got a little mushy, I'm not gonna lie. I was like, 'Holy cow, all these people are here.' I held it together."

Burt still has one more season to lead New Hope on the mound and at the plate, but Wednesday's short signing ceremony was a perfect culmination to the long journey he's undertaken.

"It's something every little baseball player dreams of as a little kid," Burt said. "It's just awesome to see everyone that came out. I just thank everyone that's been a part of the ride. I thank the good Lord, too. Without him, none of this is possible."

Burt has found success at New Hope in both pitching -- he threw a one-hit shutout against Sumrall in the state title game this spring -- and hitting, where he slotted in as a lefty bat with some power whether playing first base or the outfield.

"He'll be one of our better players coming back," New Hope baseball coach Lee Boyd said. "He'll be our No. 1 on the mound. He'll play center field or first base when he's not pitching and hit in the middle of the order. Looking for another big year for him."

Boyd said several junior colleges across the state were recruiting Burt, but after a couple visits over the summer, Burt settled on Pearl River. He committed in August.

"They were just the best one, I thought, for me," Burt said. "They have nice facilities. They have a great coaching staff. ... It's just where I felt like I was going to succeed the best."

A local connection also helped Burt make his decision. Burt and Heritage Academy's Banks Hyde, who played together in Little League and growing up, will both play at Pearl River -- and they'll live together, too.

"That was another thing that helped me pick Pearl River, was, 'hey, let's go there; we'll be roommates,'" Burt said. "We've known each other a long time."

Burt said his biggest dream is playing for LSU someday, but he knows there's a ways to go before he can make it to Baton Rouge.

Given Burt's experience playing with the Yalobusha Giants travel ball team, Boyd is confident Burt can achieve his goal of playing at college baseball's top level.

"Ryan's played a lot of baseball with some kids that you'll see on TV one day," Boyd said. "I really think he's got a chance to play at a Division I program once he finishes at Pearl River. Ryan's a tremendous player."

Burt's trying not to look that far ahead yet, though. The three-hour drive from Pearl River's Poplarville campus to Columbus is just enough. It's far enough from home for him to see if he can "make it," but it's close enough to remain connected -- something that, to Burt, is still important.

That showed Wednesday, when a small but rowdy group Burt dubbed "the mafia," a few younger boys from the neighborhood he grew up in, joined his family and classmates at the signing ceremony.

"They're like the little brothers that I never had," he said. "They do everything with us."

Burt isn't quite ready to leave for Poplarville just yet, and his signing ceremony was a reminder of everything he'll miss -- mafia included.