Despite a trying season, Joe Moorhead continues to learn as a head coach 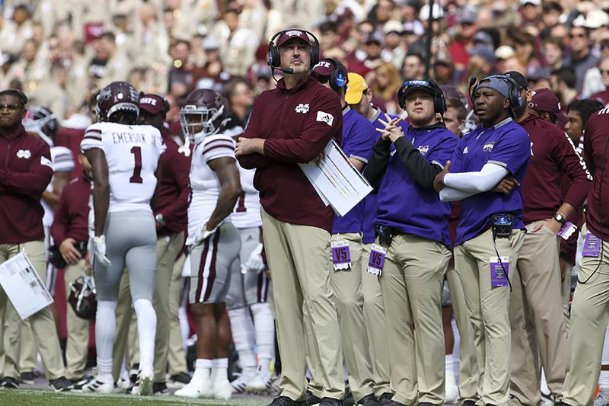 Mississippi State head coach Joe Moorhead looks up at the video board during the second quarter Oct. 26 against Texas A&M. Photo by: John Glaser/USA TODAY Sports

STARKVILLE -- Fighting through a slew of injuries, an ongoing quarterback battle, and the suspensions of 10 players due to an academic misconduct scandal, year two in Starkville has been far from simple for Mississippi State coach Joe Moorhead.

But for the former Penn State offensive coordinator, this year has offered a chance to refresh his ever-growing booklet of coaching knowledge and take on the challenge of the unknown.

"You know it's my second time sitting in the big seat -- certainly this time at a higher level," Moorhead said, referencing his lone previous head coaching tenure at Fordham. "In my experiences at Penn State, UConn and Akron -- which was 1A football -- you talk to other coaches and try and bend their ear and gain wisdom and insight, but there's never a spot in the manual for some of the things that pop up, and you're not prepared for (them). So you try to flip through your head coach manual that you use, and there's just some things in there that aren't in the table of contents."

Following an 8-5 debut campaign, the Bulldogs were expected to regress some -- though not as much as they have. Given the departures of NFL first-round draft picks Johnathan Abram, Montez Sweat and Jeffery Simmons, the defense was left without playmakers and vocal leaders.

Offensively, quarterback Nick Fitzgerald -- who concluded his MSU career as the program's all-time leading rusher -- left a gaping hole at the game's most important position. Graduate transfer Tommy Stevens was expected to fill that void, but injuries and ineffective play have forced him in and out of the lineup.

Freshman Garrett Shrader enrolled mid-year and looked bound for a redshirt, but Stevens' circumstances forced him into action -- though a nagging lower-body injury kept him off the field in last week's win over Arkansas.

Beyond the departures, the suspensions of 10 players due to their part in the NCAA scandal involving a tutor completing coursework for the involved athletes have left the MSU's depth chart further depleted.

"Part of the thing that keeps (coaching) interesting, so to speak, is that there's always going to be something you're not prepared for," Moorhead said. "And I think we've done a pretty good job adjusting to it."

Outstanding issues aside, recent circumstances have seemingly shifted the tide in Starkville. Following a blowout win at Arkansas, MSU -- now 4-5 and 2-4 in SEC play -- needs two wins over its final three games against No. 2 Alabama, Abilene Christian and Ole Miss to reach bowl eligibility.

With the bye week in tow, the Bulldogs also have a chance to regroup while 11 of the 13 other SEC teams see action Saturday.

With the season nearing its close and the pressure set to ramp up as MSU's nine-season bowl streak hangs in the balance, Moorhead is staying true to his season-long message of consistency.

"I think more than anything, and I say to the kids all the time, tough times don't test character they reveal it," he said. "And I think when you start becoming reactionary or changing who you are or what you do based on the circumstance that people can see through it. And I think through some of the ups and downs and some of the losses and some of the wins, our kids have seen in myself and our staff, the plan and the approach have remained consistent."

"I think there have been a lot of circumstances probably outside of our control that have forced us to work around some issues and be a little more strategic in our plan," Moorhead added. "From an overall standpoint you'd obviously like to win every game and be undefeated, but I think from a big picture perspective we're headed when we need to go."