'We just have to grow up': Young New Hope team trying to build on last year's second half 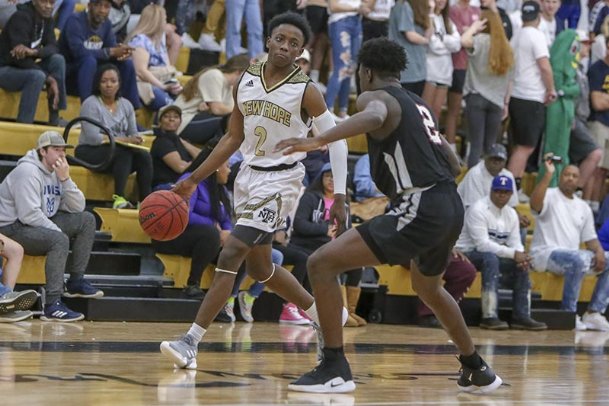 Senior RL Mattix will be one of the leaders again this year for the Trojans. Photo by: Chris McDill/Dispatch file photo

The Trojans started 2-9 before doing an about-face, clawing back to finish the season at .500.

"The way we started last year to what we got to was a big accomplishment for them," McBrayer said.

But many of the players who saw big minutes last season have graduated, including Tikorrian Chandler, Presley Langford and Krash Pascisco. New Hope still has eight seniors, but two are brand new to the team as of this summer. Only a couple even saw the court in last year's playoff loss to Greenwood. And the team moved up to Class 5A this season, meaning another adjustment in the competition New Hope will face.

"We just have to grow up," McBrayer said. "We're a really young team."

The Trojans' starting lineup will be young as well, featuring freshman L.J. Hackman along with a sophomore and three seniors. Hackman played with the team last season and is developing well.

Senior guard RL Mattix is poised to lead the team, and he's got plenty of support. Duane Hughes, Jaylen Smith, Aijah Brownlee, Tyler Terry and Taylon Stevenson are all ready for their final year with the Trojans. Jason Peden and Gabe Dickerson are first-time additions in their senior year, but McBrayer said that by now he doesn't consider the two to be newcomers anymore.

"I don't feel like they're new to us, because they've been with us since this summer," McBrayer said. "We've kind of incorporated them in."

All told, that's a lot of seniors, and McBrayer needs them to replace the on-court impact of last year's crop.

"They had some size last year, a couple of those guys did, that we just don't have this year," he said. "We're small and very quick, and we get up and down the floor well, but we're just small. We're gonna have to find a way to replace that size somewhere."

With New Hope at a disadvantage in size, McBrayer is trying to up the tempo on offense whenever possible.

"I think we're gonna have to get out in the open floor, push the pace to make up for some of our inadequacies," he said.

McBrayer and the Trojans' seniors all agreed that shooting remains a strength of the team, but on defense, Smith said, his coach is still working out the kinks.

"We're working hard on both ends of the floor," McBrayer said, "but we are trying to get better defensively."

New Hope is also practicing hard on the boards, with McBrayer fully aware of their importance in the high school game.

"If we can rebound the basketball, we're gonna be OK," he said.

As long the Trojans can approximate last year's team in transition, on the glass and in the paint, New Hope can have another respectable season. But if they can match the impact last year's seniors had on them, it could be a different story.

"We've got a big group of seniors, so I think we can replace that leadership," McBrayer said. "It's just a different dynamic this year."