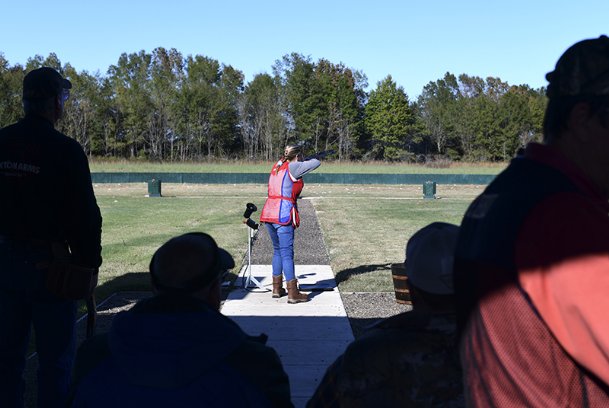 Mendy Kiper watches as a clay pigeon deploys during the Black Prairie Helice Fall Harvest Invitational on Saturday at Prairie Wildlife in West Point. Kiper began shooting helice in 2013. Her husband taught her to shoot after gifting her a gun for Thanksgiving in 1998. âIt was really for duck season,â Kiper said jokingly. The two now own Cottonland Gun Club in Winnsboro, Louisiana. Photo by: Jennifer Mosbrucker/Dispatch Staff

The shotgun sport, known for its difficulty because its targets move in multiple directions, was in its infancy in the U.S. Helice "rings," as they are known, were few and far between. After his demonstration in the Palmetto State, Imes, one of the owners of The Commercial Dispatch, didn't try helice again for 13 years.

But when he was re-introduced to the sport two years ago at Selwood Farm in Alpine, Alabama, Imes was hooked.

"When I went to Selwood, it brought it all back," he said. He told Jimmy Bryan, the owner of the Prairie Wildlife conservation estate in West Point, "'We need to have one of these.'"

Bryan was convinced, and the two went in together as partners for the first helice field in the state of Mississippi. With lights, clubhouse, fans for the summer and heaters for the winter, the facility, which opened last March, is state of the art.

Black Prairie Helice, as the estate's helice fields are known, is still one of few courses in the country, and it attracts professional helice shooters from all over the area. At this weekend's Fall Harvest Invitational, 29 shooters represent five states beside Mississippi: Alabama, Tennessee, Texas, Louisiana and Arkansas.

They've formed a community that bonds through the sport Imes called "one of the hardest shotgun sports that I've ever done."

Shooters from Birmingham and Montgomery, Alabama, head west on Saturday mornings to shoot as a group, and several shooters visit the course for its open field on Thursday. The course holds monthly tournaments, mostly unofficial ones. But this weekend's invitational is sanctioned by the United States Helice Association, and it's a qualifying round for next year's USHA nationals.

USHA representatives visited a couple tournaments at Prairie Wildlife, and after October's world championships in Rome, the association awarded the course the chance to host the 2020 nationals in late July.

"We've been walking on a cloud ever since," Fairley said.

Prairie Wildlife's first ring is less than two years old, but it's already made an international impact.

Imes competed at this year's world championships in Rome in October, and he shot alongside more than 300 people -- several of whom had visited West Point to shoot the Black Prairie course.

"It was just an honor to be there," Imes said. "Everything was kind of like a blur."

It wasn't a blur when the time came to focus on the fast-moving plastic targets, though. Imes tied for second in his age group of 65 and over, but he lost a "shoot-off" and received a third-place designation. As long as he can qualify, he plans to shoot at the 2020 world championships in Cairo, Egypt. After the familiar atmosphere he experienced in Rome and in tournaments across the U.S., he's happy to compete in as many events as he can.

'It's always a challenge'

The shooters Imes has met are the best of the best in a sport that's hard to master. It takes intense focus and stellar hand-eye coordination to hit the targets, and unlike shooting clays, you can't just nick them: A shooter must remove the plastic "witness cap" from the center of the target, and the cap must drop inside the fence that forms the boundary of the field. Given 30 "birds," few shooters ever post a perfect score, Fairley said.

"Most people typically don't shoot in the 20s the first time, and if they do, they probably don't do it the second time," he said.

There's little margin of error in a competitive tournament, according to Fairley, who said he's never broken 27.

Helice targets are fired randomly from one of five machines, and they flutter quite unlike skeet or clay targets. So it's no surprise that helice is seen by many, including Fairley and Imes, to be the best imitation there is of live bird hunting.

"This is the closest you'll ever get to shooting anything instinctively that doesn't bleed," Fairley said.

For helice shooters, the wind and the background of a helice field can make a big difference -- and make each course unique.

"I really enjoy doing it because it's kind of like playing golf," Imes said. "You never have the same shot twice. Every shot is different."

Much like golf courses, each helice field has its own distinct properties. The ring at worlds in Rome had a berm behind it, Imes said, and he once shot at a range in Louisiana with a cornfield as the backdrop. That makes for enjoyable variance when shooters try out different rings.

No matter the course or the experience of the shooter, helice is hard, and Fairley knows it.

But that's where practice comes in. Men and women ages 15 to 86 practice and compete and Prairie Wildlife, Imes said, and there's always an adjustment to be made when starting out.

"Everybody that has an opportunity to come here and be introduced to this sport, they pretty much come back," Fairley said. "You can make it a scramble. We can do teams. I can throw doubles or pairs or whatever. It can be a very fun and social event."

It's just as much a social event for the shooters who descend on West Point from all over the region for tournaments.

"We tell people that if they can get to Columbus, West Point or Starkville, we got it from there," Fairley said. "We have guns shipped in, and we have to ship them back out. Making sure that you have an ample amount of ammunition: the right ammunition. And making sure that everybody's satisfied and has a good time."

The course has hosted its share of world-class shooters in less than two years. But it's produced them, too. Fairley is proud of that.

"Some of the best shots in the world come from here," he said.