'Just keep breathing': How Matt Zajac conquered the odds to walk on the field at Davis Wade Stadium 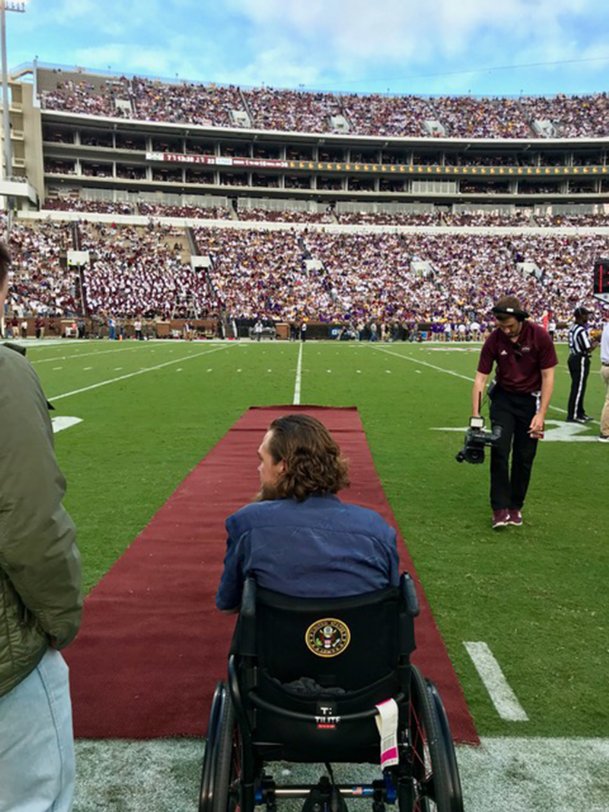 Sergeant Matt Zajac looks on as the Davis Wade Stadium crowd awaits his on-field honoring during last Saturdayâs game between Mississippi State and No. 2 LSU. Photo by: Photo courtesy of Mikel Brooks

Seated in his wheelchair at the foot of a maroon carpet on the 15-yard line, Zajac buried his head in his hands. Reality set in. The 59,482 fans in attendance were cheering for him.

"When he's sitting out there in the wheelchair and he was looking around at the crowd, and then the camera pans back to him and he starts clapping, that whole feeling is what it's all about," Tim McCann, the Central Arkansas Project Manager for Sheep Impact Assistance, told The Dispatch.

With the harmony of Lee Greenwood's "God Bless the USA" coupled with the deafening roar of MSU and LSU fans alike surrounding him, Zajac was set to exit the field.

"I thought one of two things," Zajac told The Dispatch. "I can put my head back down and wheel myself along, or I can stand up, stand tall, keep my head up and walk back off the field. I chose the second option."

Adjusting his sleek black prosthetic legs, the New Mexico native grasped the sides of his wheelchair and propelled his torso upward.

With a slight misstep, he regained his balance and trotted off the field. The cheers grew louder.

A double-amputee and retired army infantryman, Zajac lost his legs in a mine explosion during Operation Iraqi Freedom in 2007. But after roughly two dozen surgeries, years of recovery, and a cross-country move, his few minutes of recognition from a school and state he had no ties to meant far more than he could explain.

"It wasn't overwhelming, but it was certainly a lot to take in," Zajac conceded. "It was almost a humbling experience with all these people cheering for me. And who am I? -- I'm but one of millions. And there I was."

Laying in a Humvee on the streets of south Baghdad, Zajac repeated the phrase over and over in his head.

A member of the second brigade, second infantry division, he and his team had been tasked with tracking down a fugitive in the city. As the ominous darkness of the Iraqi night intertwined with the crunching of rocks under Humvee tires, Zajac sat behind the wheel.

Coming upon a narrow bridge, he spotted an object sticking out of the ground.

He decided to swerve to the right of the object. The driver's side of his Humvee was padded with extra armor. If the mysterious object exploded, there was some added cushioning.

As the Humvee passed the protrusion, smoke and pavement shards filled the air. Barely able to see a foot in front of him, Zajac could just make out the hole in his right wrist. He gingerly tried to pull his blood-spattered body from the wreckage. His legs wouldn't move.

"I couldn't see them but I knew they weren't working," he said.

Grievously injured, Zajac was trapped in the truck. Yelling his company name, his own name, and anything else that rescuers might recognize, he was finally pulled from the vehicle and loaded onto a truck bound for the army hospital -- a 20-30 minute drive from his location.

"In that situation I couldn't really think about anything else but keep breathing," he recalled. "That was it. Keep breathing."

"It would have been so easy to not (breathe) anymore," Zajac continued, choking up with each word.

After being triaged to a Combat Support Hospital, he was put into a medically-induced coma and airlifted to Landstuhl Regional Medical Center in Germany. With limited medical capabilities there, he faced another life-threatening decision.

Although the doctors were unsure whether he would survive a trans-Atlantic flight, Zajac opted to board a plane home.

"I went ahead and agreed to be manifested for the flight to get out of there and get back to the States figuring, 'Well, I've kept myself alive so far, what's another ocean to cross, huh?" he said.

Despite doctors' doubts, Zajac survived the trek. He was promptly checked into Brooke Army Medical Center in San Antonio, Texas where his extensive road to recovery began.

"It was the only flight I've ever been on where I was laying down and it was still the most miserable flight I'd ever been on," he said through a chuckle. "I guess you can't win 'em all."

No soldier left behind

Hovering around a Smoke Shack in the early days of his stay at Brooke Medical Center, a man in a wheelchair caught Mikel Brooks' eye.

"You lost, man? You need help?" Brooks posited in a playful tone.

"Shove off," Zajac retorted, only half-joking.

While neither were particularly familiar with the other patients, Brooks and Zajac bonded almost instantly in that moment.

The pair had their similarities. They arrived around the same time and were both awarded Purple Hearts for their valor.

Brooks -- like Zajac -- had also been wounded by an improvised explosive device while doing a route clearance south of Baghdad. The blast delivered shrapnel into his left hip and caused a traumatic brain injury among other complications. He'd spend two years at Brooke recovering.

With Brooks at his side, Zajac was discharged from the hospital following roughly 24 surgeries -- he's lost count over time -- and just more than a year's worth of rehabilitation in mid-2008. He officially retired from the Army on Aug. 26, 2009 -- almost two-and-a-half years after he lost his legs.

Heading back to his hometown of Las Cruces, New Mexico, Zajac enrolled in courses at New Mexico State University in hopes of completing a mechanical engineering degree.

For a moment, he regained some normalcy in a life -- a normalcy that was quickly consumed by heartbreak.

Within six years of returning home, Zajac's father passed away due to a failed pancreas, while his grandmother followed around a year later -- just short of her 90th birthday.

"That hit me pretty hard -- We were real close. " Zajac, who was subsequently forced to drop out of school, said of his father. "I didn't have a mother growing up, he raised me in addition to taking care of my grandmother."

Back in Arkansas, Brooks faced tough times of his own. After a bout with prescription drug addiction and homelessness, he attempted suicide on Feb. 17, 2017.

Surviving the overdose, Brooks founded We Are The 22 -- a nonprofit veteran suicide response team named in honor of the 22 veterans that commit suicide per day.

Sitting on his couch early last year as We Are The 22 got off the ground, Zajac popped into Brooks' mind. It had been years since the two corresponded. Brooks decided to do some digging.

A Facebook page attributed to his old friend existed, but it hadn't been updated in some time. Brooks heard rumblings Zajac moved to Arizona -- though nothing concrete.

After a handful of failed connection attempts, Zajac finally called him back. He explained how his father and grandmother had passed and that he was on the precipice of losing his house in the Phoenix-Area.

On Feb. 16, 2019, volunteers helped Zajac pack up his Arizona home as he made the move to Little Rock, Arkansas to live with Brooks.

Once in town, he received treatment for post traumatic stress disorder through a U.S. Department of Veterans Affairs program.

"He started coming back," Brooks said.

Zajac was on the road to recovery once more.

Attending a national conference for the Kappa Alpha Order fraternity in North Carolina last summer, a former chapter president explained how his brothers had worked with The Independence Fund -- a national organization that aids wounded, injured or ill veterans -- to raise $16,000 for a track chair -- an advanced, all-terrain wheelchair -- for a veteran.

East, a senior at Mississippi State, was inspired. Bringing the idea back to his fraternity brothers, he challenged them to meet the $16,000 minimum it takes to purchase the specialized chair.

With fundraising beginning last spring, East -- the chapter president -- and the MSU KA's raised a total of $20,586. Last Saturday, they presented their gift to Zajac -- who had been paired with the chapter through The Independence Fund.

"To be able to see (Matt) receiving the chair at KA was really emotional because you could see the impact it was going to have on his life," East told The Dispatch.

In conjunction with their philanthropic efforts, Checky Herrington -- MSU's Brand Manager and a KA faculty advisor -- worked with East and the athletic department to honor Zajac during last Saturday's game against LSU.

"I thought it was a great idea," Herrington told The Dispatch. "I knew that Mississippi State was a veteran-friendly campus, I know that we recognize a veteran each home game and so I thought it made great sense to recognize Matt."

Standing near the kicking net along the MSU sideline Saturday, sophomore punter Tucker Day looked on as Zajac stood from his chair. Meeting Zajac as he came toward the bench, Day approached. The two embraced.

"I got really emotional, I started tearing up a little bit," Day said. "That guy gave his legs for his country and next thing you know he stands up holding his fist in the air basically saying he's still got it. That was pretty amazing."

"When he stood up, he united the people in that stadium," Brooks added. "He reminded them of the struggle and the sacrifices made and he did so in such a heroic way that it affected everyone there."

It's been 12 years since Zajac narrowly clung to life on the hellish streets of Baghdad, but now reinvigorated with an advanced mode of transportation, a plethora of support and a stadium's worth of new fans, he's regained the will to live -- something that was seemingly lost just a few months ago.