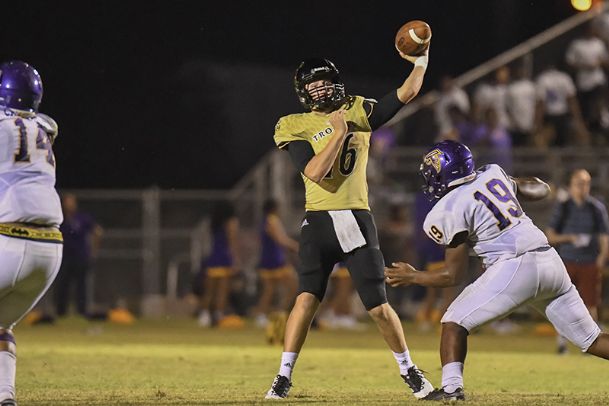 New Hope quarterback Ryan Burt (16) looks for a receiver over the middle during a game against Columbus earlier this season. Photo by: Austin Frayser/Dispatch file photo

After New Hope's second straight division loss, Friday's 34-0 shutout at the hands of Lake Cormorant, Trojans coach Wade Tackett was honest about where his team stands.

New Hope has five district games to go, beginning with Thursday's game against Saltillo -- rescheduled from Friday due to weather concerns.

While the game is on the road, it might be the Trojans' best chance to get a district win, with the Tigers coming off a 34-7 loss at West Point. But New Hope has to clean up plenty of things about its game to make sure.

"We just need to do better up front, stay on our blocks," Tackett said. "Backs gotta be a little bit better about finding the hole and hitting it. We've gotta complete more passes."

If the Trojans can get an excellent passing game from quarterback Ryan Burt and a star turn from running back Braylen Miller, they should have a great chance at a road district win New Hope desperately needs.

"We need to get something rolling now," Tackett said.

Noxubee County is happy to be back on track and back in the Class 3A rankings after last week's 19-12 win over Houston snapped a three-game losing streak.

But the Tigers know the work doesn't stop there.

They've got another ranked opponent to deal with on Thursday when they visit Corinth (5-1), the third-ranked team in Class 4A.

"They run the ball very well, score a lot of points," Noxubee County coach Teddy Young said. "To stop that type of offense we've gotta win in the trenches. We've gotta have penetration."

The Tigers will also have to stop Corinth senior running back Tameron Patterson, who rushed for four scores last week in a blowout of Tishomingo County. Young knows his squad will have to gang-tackle the "tough runner" to put the clamps on the Warriors' offense.

If Noxubee County's own offense can really get it going -- quarterback Marlon Windham has shown improvement but still needs to make leaps in diagnosing coverage, Young said -- and limit the turnovers that nearly cost them the game against Houston, the Tigers may just be able to keep that momentum going.