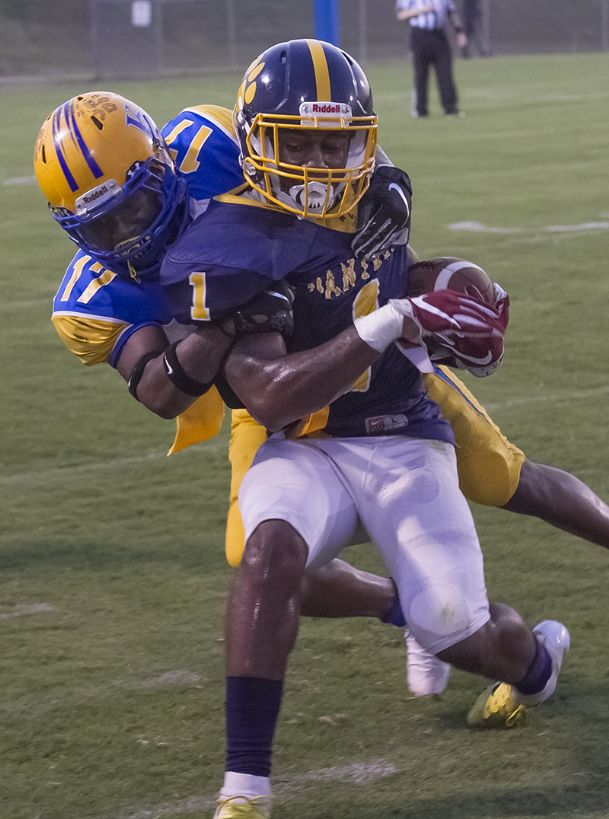 West Lowndes receiver Albert Plair is tackled by Kemper Countyâs Izaiah Bourrage after a catch during a game on Sept. 7. Photo by: David Miller/Dispatch file photo

West Lowndes football coach Anthony King knows his program isn't yet where it wants to be.

That disparity is clearly exemplified by the Panthers' opponent Friday: Smithville, a perpetually strong team that West Lowndes has never beaten.

"Smithville is a traditional football powerhouse, and their guys believe," King said. "We're trying to get our guys to believe."

It's a tough task, but West Lowndes came two scores from beating current No. 1 Nanih Waiya on Sept. 20, and the Panthers think they can pull off the upset this time.

West Lowndes is led by a host of two-way linemen -- "our offensive line is our defensive line," King said -- who played well against the top-ranked Warriors and hope for a repeat performance against Smithville.

"They're not very big," senior lineman Tommie Malone said. "I don't think they can stop us. If Nanih Waiya couldn't stop us, then I don't think any team can."

The Panthers' line will be the key to a game in which weather might play a deciding factor. The contest hasn't been rescheduled like many around the state, but thunderstorms projected to make landfall Friday could shake up both teams' plans.

And for King, whose team relies far less on the passing game than Smithville does, that's a point in the Panthers' favor. West Lowndes is happy to depend on the rushing efforts of senior Jherquaveus Sanders, who will return to action after missing last week's game with a sprained ankle, and seniors Albert Plair and Kelvin Wilburn will play key roles.

"They can't just key on one player, so it's gonna be tough to defend," Plair said.

And even the small roster that is a Class 1A custom, the Panthers have even more depth behind their seniors, fielding junior Marcquez Holliday and sophomore Marquez Shelton.

"Where most teams depend on one player, I think we've got about four or five," King said. "We've got a lot of weapons."

It's a welcome new feeling for a school that has historically been wanting for depth all over the field.

"Every year we used to be one or two players away," King said. "Now I think we've got pretty much everything we need this year."

West Lowndes might have all it needs, but it remains to be seen how far that will take the Panthers. Friday's game is their final home contest of the year, and a road matchup with No. 3 Noxapater next week kicks off a slate of three road games that will end the regular season.

If West Lowndes can beat both Smithville and Noxapater -- no easy task -- it would have an excellent shot of hosting a playoff game as the No. 2 seed in its district. And if they run into Nanih Waiya again, the Panthers will be prepared.

But the Panthers know better than to get ahead of themselves. West Lowndes remains squarely focused on the task at hand: beating Smithville on Friday.

"I think it'll be a hard-fought game, but I think we'll come out on top regardless," Malone said.