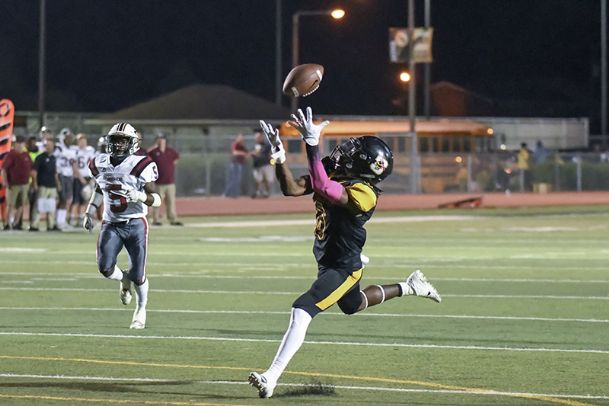 For one, he's a touch guarded -- almost quietly charismatic.

Speaking with a reporter Wednesday, Harvey's thinly braided dreadlocks hid under a gray hoodie as he nervously chuckled through a handful of questions regarding his standout season thus far.

"We've got good receivers all across the board..." he said trailing off into an antsy laugh.

And while the interview setting brought on some nervousness, Harvey is boisterous when it comes to his play on the football field.

The 5-foot-10 speedster is as athletic as they come. A one-time basketball standout, he gave up the game to focus on football -- though he often reminds onlookers what he's capable of on the hardwood.

"We see him in the gym dunking like he's 6-foot-3," Starkville football coach Chris Jones quipped. "He's probably the best basketball player in the school ... He's that kind of talent."

While Starkville's offense is littered with weapons, it's Harvey who drives the ship. A three-year starter, he plays everywhere from wide receiver to running back to wildcat quarterback.

Having grown up playing tailback, Harvey fits alongside Altmyer in the backfield. But with a crowded running backs room, he's thrived as a receiver.

Through seven games, he's totaled 446 yards and five touchdowns on just 34 receptions this season -- all of which are on pace to break his standout totals from last year.

Athletically, his leaping ability allows him to contend against bigger corners. Take the Sept. 27 game against South Panola, for instance. Stepping into the pocket, Altmyer looked downfield, pumped once and lofted a ball toward the left sideline.

Whipping his head around, Harvey contorted his body, got underneath his defender and jumped close to three feet off the ground. With his arms outstretched, he reached high into the air and snatched the ball above a South Panola defender a la Randy Moss.

"He got like a 40-inch vertical jump on that," Altmyer joked.

Given Harvey's dynamism, Jones has begun keeping a "Rufus touch chart." As running backs coach JD Poss keeps a drive chart, he also makes note of how many times Harvey receives the ball throughout the game -- though the exact scripted number fluctuates week to week.

"He's so good," starting running back Amariyon Howard said. "Anytime we need a long play to get us a new set of downs, we can call on Rufus. He'll probably get us the first down or a touchdown."

With a standout start to the season, accolades have begun to roll Harvey's way. Following last week's 138-yard, one-touchdown effort against Germantown in which he also passed for a 12-yard score, he was named the Starkville Daily News' OCH Regional Medical Center Athlete of the Week.

Harvey was also selected for the Mississippi roster for this year's Mississippi/Alabama All-Star Game.

And though he's been recognized statewide, he hasn't received the big-time collegiate offers Altmyer and Howard have. Currently, Harvey's offer sheet reportedly includes Southern Miss, South Alabama, Arkansas State, Austin Peay and Samford, among others, while his lone Power Five scholarship offer to date is Illinois.

That said, he's remained upbeat and positive regarding his collegiate options.

"He's not selfish at all, and it's hard to find kids like that these days," Jones said. "He hasn't come to me one time asking me about an offer, or why this school won't offer him, or whatever the case may be."

College choices aside, Harvey is focused on the task at hand -- helping Starkville to a win Friday at Greenville.