As road matchup with Holmes looms, EMCC still has a lot to play for 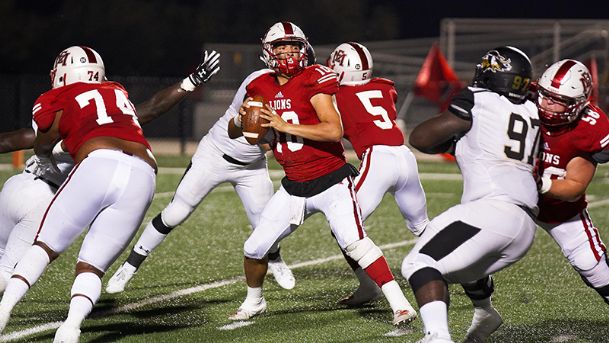 East Mississippi Community College's national title hopes may be dashed, but the Lions still have plenty to play for.

After EMCC (4-2) lost its second game of the season -- typically a death knell for teams trying to win a National Junior College Athletic Association title -- coach Buddy Stephens admitted that the Lions had moved on but that there are still plenty of goals in front of them: Helping players graduate and receive Division I scholarships. Competing for a state championship. Making a bowl game.

That all starts for the Lions with a road game against Holmes (2-4) at 6:30 p.m. Thursday in Goodman. The Bulldogs are coming off a 27-21 loss at Itawamba, a team EMCC routed earlier in the year, but Stephens is aware that the week prior, Holmes handed Northwest Mississippi its first loss of the season. Northwest then came into Scooba and doled out a 56-36 loss to EMCC, so Stephens and the Lions know Holmes is not a team to be overlooked.

Statistically, Thursday's matchup shouldn't be close. The Lions have a much better pass defense than do the Bulldogs, and EMCC averages close to twice as many points per game. But EMCC has been susceptible on the road before -- see a 24-16 season-opening loss at Hinds -- and the Lions haven't looked much like the world-beaters they've been in seasons past.

To avoid disappointment Thursday, the Lions will have to key in on Holmes' rushing attack. Northwest's Chris Calvert led the charge last week and often gashed the EMCC defense for big runs, and Holmes might bring more of the same with a rushing average of 255.5 yards per game -- though the Bulldogs average just 35.5 yards per game through the air.

In the Bulldogs' 47-42 win against Holmes, three different backs averaged more than 10 yards per carry, and all three scored. Kyren Batey had 16 carries for 162 yards and two scores, Danny Woodard had seven carries for 114 and a pair of touchdowns, and Devontaye Bankston scored on one of his six carries for 63 yards. All in all, Holmes ran circles around the Rangers to the tune of 480 yards rushing.

Given the occasional weakness of EMCC's defense, the Lions will need to take steps to contain the Bulldogs' ground game. Holmes rarely turns to the pass -- Batey had just seven passing attempts against Northwest and six against Itawamba -- so homing in on the run should be enough.

On the other side of the ball, if EMCC quarterback Connor Neville can limit turnovers, the Lions should find success against a vulnerable pass defense. Neville struggles against heavy pressure in the pocket, but he shouldn't encounter too much resistance against a defense that gives up 262.5 passing yards per contest.

EMCC averages 340 yards per game through the air, so if Neville can avoid interceptions and rely on star wideout Jason Brownlee, the Lions have a clearly demarcated path to success.

So if it can manage to do a few critical things right, EMCC will find itself with a road win and an ideal start toward reaching the goals it still hopes to achieve.