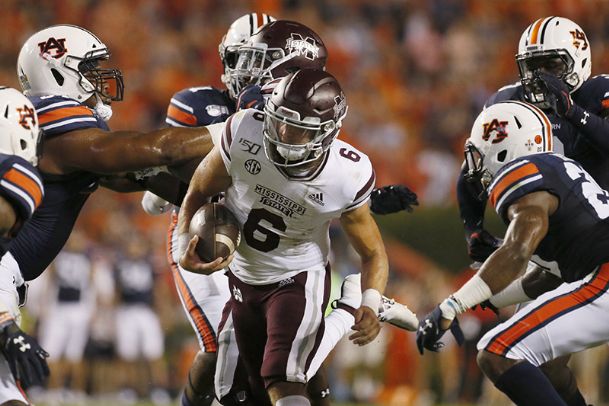 STARKVILLE -- The weekly cliche out of the Mississippi State football program following losses this season has been not allowing a single defeat beat you twice.

After suffering an 56-23 demolition at the hands of then-No. 7 Auburn two weeks ago, that has again become a consistent phrasing within the MSU locker room this week.

"It can go one or two ways: You can either dwell on it and allow the same game to try and beat you twice, or you can correct it, put it to bed and move on," Moorhead said of the Auburn game. "We chose the latter."

With Moorhead's mantra in tow, MSU left The Plains with not only a sour taste but a chance to regroup. After practicing Tuesday and Wednesday, players were given Thursday and Friday off to kick back and relax during their bye week.

Junior running back Kylin Hill spent the down time back at home in Columbus with family recouping from the bumps and bruises being a Southeastern Conference running back brings on.

"It was cool to go back and see some of my friends there," Stevens said Tuesday.

In the case of Moorhead, the 10 days since the throttling on The Plains was a chance to hit the recruiting trail, as he and his staff visited a combined 101 schools and 20 games between last Thursday and Friday.

And while he was out recruiting, critics of the program grew fiercer and far louder than they have at any point this season -- something Moorhead was wholly cognizant of as he met with the media Monday.

"I'm sure there was criticism for our performance in the Auburn game was warranted, and I accept that, and I point the finger at myself," he said. "We needed to perform better against a quality opponent.

"From an overall standpoint, there is always going to be a certain faction or segment of a fan base for any team in the country that is a vocal minority, and nothing that you do is going to be good enough. It's going to be a simmering cauldron of unrealistic criticism and revisionist history. It is what it is. I am not going to focus my time, attention, or efforts on Bob from Bogue Chitto's opinion of the team."

With Moorhead's words in mind, MSU has boasted a reinvigorated mindset heading into a weekend date with Tennessee (1-4, 0-2 SEC).

While the Volunteers have been much maligned this year for their dismal start and a season-opening home loss to lowly Georgia State, MSU's head coach was quick to dismiss the idea his team could be lax in their preparation.

"I don't necessarily think the overall record is indicative of their talent and their performance," Moorhead said. "I think they have been really close in three games and have done a nice job. They just kind of came out on the short end in a couple of games."

Now almost two weeks removed from the Auburn game and with a bye week under their belts, the weeks-old cliche Moorhead has preached is taking effect amongst his team.

"They have a lot of young talent," Hill said Tuesday. "We don't look at their record. Obviously anything can happen -- it's the game of football -- so we've got to approach them like they're undefeated."