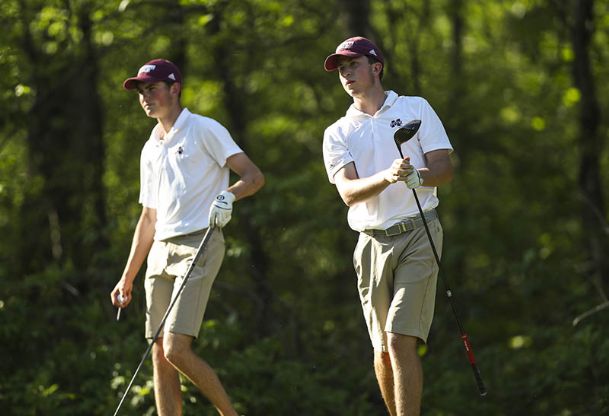 Mississippi State sophomores Ford Clegg (left) and Austin Vukovits didnât get along right away when they were assigned to live together. âAnd now weâre like best friends,â Clegg said. Their relationship is an example of how the Bulldogs have cultivated a âfamily atmosphereâ at MSU. Photo by: Kelly Donoho/Mississippi State Athletics

STARKVILLE -- Last fall, during his freshman season on the Mississippi State golf team, Austin Vukovits wanted to make an impression.

He joined his teammates for a Thursday Night Football watch party at assistant coach Charlie Ewing's house. For the weekly event, it's "bring your own meat" for Ewing's grill, but Vukovits said he "wanted to do something weird."

"I brought this big old pineapple," Vukovits said. "Everybody was like, 'What is this?'"

Vukovits sliced up the fruit and grilled it -- something he'd only tried once before at home -- but his teammates were skeptical.

"First time, nobody really ate it," Vukovits said. "But the third time, it was the most requested thing there."

The Bulldogs warmed to the grilled pineapple just like they warmed to Vukovits, the Indiana native and the lone Northerner on the team. It's just one of many examples of the close relationships the team's 11 players have formed on and off the golf course.

"Mississippi State is all about having a family atmosphere, and that's what we are," redshirt sophomore Ben Nelson said.

The Bulldogs live, travel, practice and play together, and they still want to spend the time they have left together.

"We're with each other all the time," Nelson said. "The only people we hang out with are people in our locker room."

Whether in that locker room in the team's practice facility in West Point, in the apartment Vukovits shares with sophomore Ford Clegg and junior Cameron Clarke at Midtown Starkville, or anywhere else, the Bulldogs play a lot of cards, typically spades or blackjack.

"Both coaches like to say that they can compete with me and Fulton, but they've never played us to prove that," Nelson said.

Mississippi State's players have a close relationship with Smith and Ewing, who provide youth and energy.

"They push us in a different way than some of the other coaches would have done," Clegg said.

The young coaches also give good advice for college in general -- outside of practice and tournament play.

"It's very open between the coaches and the players, so I think that makes it really good that we can always come to them and talk to them about anything," Vukovits said.

The players also count among their fond memories as Bulldogs the annual retreats they take with their coaches. Two years ago, they went to Clinton, and last year, with Smith's wife pregnant, they stayed home at Old Waverly Golf Club, next door to their practice facility.

So was the trip the Bulldogs took to Tuscaloosa for Mississippi State's basketball game at Alabama -- "just messing with each other all the way there and back," Nelson said.

And the trip to Desert Mountain Golf Club in Arizona, made sweeter by victory.

But when they're not on the road, the Bulldogs have plenty of time for fun in Starkville.

They eat at Waffle House on the weekends, are partial to Bulldog Burger and go to Newk's "a ton."

The team also eats sushi at every tournament, to Clegg's dismay.

But it wasn't easily formed for Vukovits and Clegg, polar opposites from the North and the South, when they were assigned to live together last year in Deavenport Hall.

"I'm kind of a free thinker," Vukovits said. "I just kind of roll with the wind, whereas Ford is very structured, has to be this way, one way, no other way."

Clegg admitted that the arrangement initially seemed bound to fail.

"I didn't really like him at first for about a month," Clegg said.

But the odd pairing worked out. A year later, the two still live together, and Clarke joined them when his previous roommate transferred.

"We're working through it," Clegg said. "We decided to room again together, so it wasn't that bad."

The friendship between Clegg and Vukovits is just one relationship among many on a team with players from all over -- including senior Peng Pichaikool from Bangkok, Thailand.

"We've got Atlanta. We've got Texas. We've got Indiana. We've got Thailand," Vukovits said. "You've got this melting pot, and you all come together."

Each of the Bulldogs has his own reason for choosing Mississippi State, and all are glad they did.

Clegg, from Birmingham, Alabama, considered Auburn and Vanderbilt before settling on Starkville.

"The facilities are amazing, and the team's fun," Clegg said. "I fit in here really well."

"Most of these guys play year-round," Vukovits said. "I felt like I had a disadvantage not being able to do that."

When he saw MSU's practice facility and realized he had access to the top-flight facilities at nearby Old Waverly and Mossy Oak, he was sold. He committed less than a week later.

"It was very quick," Vukovits said. "It was an easy decision."

He called access to the two courses the Bulldogs' "best recruiting pitch," and Nelson concurred.

"That's the reason why we get some good guys to come here," Nelson said.

Once the Bulldogs assembled in Starkville, growing familiarity becomes crucial, and part of the way the team tackled that goal -- intentionally or not -- was the nicknames.

Every Mississippi State player has one, and some aliases are obvious: Vukovits goes by "Vuks" or "Vukey." But some aren't: freshman Hunter Logan is routinely referred to as "Crump" or "Bop."

"It's either a last name or you've done something of significance that was memorable," Vukovits said.

But none of the nicknames compares to the one their head coach bestows on everyone.

"Coach calls us all Ned," Clegg said. "I don't even know what it means."

The humorous nicknames show the familiarity the team possesses -- familiarity that comes in very handy when the going gets tough on the golf course.

"It's such a hard game that it'll get to you very easily," Vukovits said. "You can be playing great one week, and the next week you don't even know what happened. It goes in waves, so it's nice to have teammates that can pick you up and get you back on track."

No matter how badly a Bulldog might be playing, Clegg said, just getting together with teammates can always help -- whether it's on the course, in the locker room, on campus or at home.

"You're always gonna have a good time just being with them," Clegg said.