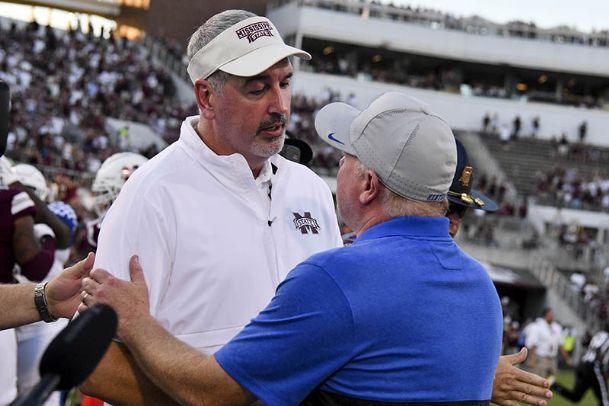 STARKVILLE -- The weight of the preseason suspensions are beginning to take their toll.

Given the ongoing nature of the suspensions, coach Joe Moorhead has released which players are suspended week-to-week just before kickoff throughout this season.

Speaking with the media Monday afternoon, Moorhead addressed the difficulties of dealing with who of the 10 players will play each game.

"It's less than ideal, I'll put it that way," Moorhead said through a laugh.

"If you look hard enough you'll find an excuse, but we don't want our kids to delve into that mindset, that mentality," he continued. "What happened is unfortunate. There's choices and consequences and we're doing our dangdest as a coaching staff to make sure it's not a distraction."

"Guys that are available in a given week we're going to fight like hell to get them ready and be well prepared and take the field with who's available, do our best to be 1-0 on a weekly basis. But in short, it's incredibly challenging."

Moorhead coy on plan under center

With the bye week now behind the Bulldogs, quarterbacks Tommy Stevens and Garrett Shrader are both likely to see time this weekend against Tennessee.

Moorhead has long preached he is against a rotational two-quarterback system, but isn't opposed to putting two signal callers on the field at once.

Stevens was a direct beneficiary of this idea as he lined up everywhere from running back to quarterback to wide receiver during his time under Moorhead's tutelage at Penn State.

Monday, Moorhead said that he does have a starter in mind but that he expects both Stevens and Shrader to see time.

"We kind of have a plan of what we expect to do with both of them healthy and continue to grind through the week," Moorhead said. "(We'll) work the plan and see where we're at on Friday."

It's also worth noting both players are continuing to recover from lingering lower body issues. Moorhead said neither should miss the Tennessee game due to their respective injuries.

And so the Kareem Walker saga continues.

Walker, who joined MSU for practices last week after spending time at Michigan and Ft. Scott Community College (Kansas), will take an academic redshirt this season according to Moorhead.

"He's going to work and do a lot of things from a scout team perspective, provide some of that older player leadership," Moorhead said. "But he will not be able to play for us in games this year."

While it's a slight blow to the running backs room this season, sitting out this year is likely a win for the MSU coaching staff.

With Kylin Hill potentially off the NFL and Nick Gibson set to exhaust his eligibility, the lone scholarship running back returning next year is freshman Lee Witherspoon. With Walker in tow, it will, at the least, bolster the groups depth heading into the 2020 season.

With a week off from competition, the bye week afforded the MSU coaching staff a chance to hit the midseason recruiting trail.

"When you're talking to a recruit and their families you want them to understand in the 4-5 years, or less if it's a junior college player, that they spend at Mississippi State that it's our goal and our objective to make sure they leave a better person, a better student and a better player -- in that order."

As it stands, MSU 2020 recruiting class ranks No. 20 nationally and No. 8 in the SEC according to 247Sports.com's team rankings.

Of the 23 commitments the Bulldogs have for this year's class, 15 hail from Mississippi -- something Moorhead was quick to emphasize.

"Like I say with Kylin (Hill) and talk about with some of the other guys, there is something special to a young man and his family making the decision to say home and play for their state university," he said. "Coaches and the kids that we talk to during the week couldn't be more fired up about what we're doing and where we're heading."