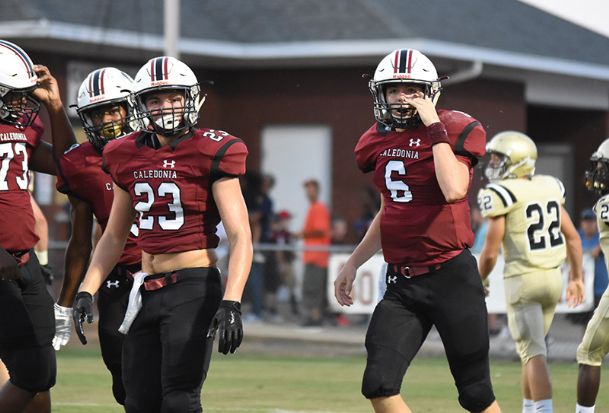 Caledonia quarterback Brandon Edmondson (6) looks to the sideline as he awaits a play call during Friday's game in Caledonia. Photo by: Garrick Hodge/Dispatch Staff

No, not even with Caledonia's quarterback in attendance was anyone picking the 'Feds to win Friday's local showdown with Heritage Academy when the church members held their weekly high school football pick 'em session. That doesn't surprise Edmondson -- but he doesn't believe it.

"It's expected, but at the same time, you know, we gotta go prove them wrong," Edmondson said.

Add to it that the Patriots are holding their homecoming game against the 'Feds -- "it kind of tells us that they think we're nothing," Edmondson said -- and Caledonia is feeling mighty disrespected.

If you ask 'Feds sophomore Kewon Wyatt, though, the team is brimming with nothing but confidence as a fun area rivalry nears renewal.

Wyatt's optimism may sound less than cautious, but he's still aware of the threat posed by a Patriots offense that's averaged 36.5 points per game in its four contests this season.

He knows -- the whole team knows -- that Heritage Academy quarterback Carter Putt is one of the best passers around. That rangy wideout Jared Long is a dynamic deep threat for Putt at receiver. That behind the Pats' strong offensive line, running back KJ Smith gives Heritage another dimension.

"Defensively, we'll definitely have to play our best game in order to keep us in the ballgame," Edmondson said.

The 'Feds' offense, on the other hand, isn't quite as straightforward nor as high scoring. Caledonia runs the triple option, something for which Heritage Academy coach Sean Harrison is on high alert come game time.

"It's a scary offense to play against, because you could be perfect all night, and one undisciplined play, and they can take it 80 yards," Harrison said. "We'll definitely have to play physical football Friday night."

If the Pats can manage that, they just might have a good chance of forcing some turnovers against the 'Feds' triple option. That's the worst-case scenario for Caledonia coach Michael Kelly.

"If we give their offense a short field with our triple option, it'll be a long night for us," Kelly said.

But Kelly knew what he was getting into by facing the Patriots. After all, he was the first to reach out regarding a renewal of the rivalry.

"Last year was my first year here, and I had a lot of people in the community ask me about possibly playing Heritage again," Kelly said.

He got Harrison on the phone, and the rest was history, as the two schools scheduled a home-and-home series. Caledonia will return the favor by hosting next year's game.

Even though the rivalry has been out of commission long enough that no player on either team has ever faced the other, the Patriots and 'Feds alike still know the significance.

Wyatt said his classmates outside the football team all plan on attending, and his family is coming, too.

"I know people out of town talking about the game," Wyatt said. "The game's big -- bigger than what people think it is."

One of the rare matchups between a public school and a private school -- Putt said he was excited for a chance to prove himself against tougher competition -- Friday's game is undoubtedly a good measuring stick for games to come. It's a big rivalry matchup, and it's the perfect way to ensure bragging rights for the victor.

But to Kelly, none of that matters when the 'Feds and the Patriots take the field.

"At Friday night at 7 o'clock, when those lights come on, it'll be just another high school football game," Kelly said.