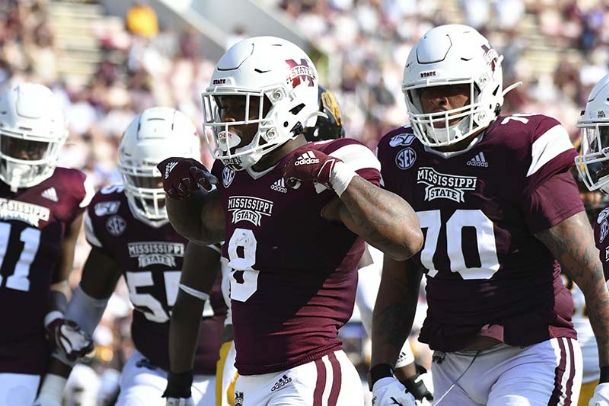 STARKVILLE -- We are back, folks.

Another week of Mississippi State football means another installment of Portnoy's Playbook.

There were plenty of wild and wacky plays to choose from in MSU's 38-15 win over Southern Mississippi Saturday, but instead of a scoring play or turnover, I'm going with Kylin Hill's first half hurdle of Southern Miss defensive back Ty Williams.

Two weeks into the season, Hill has lived up to the immense preseason hype he received as he currently leads the SEC in rushing with 320 yards and sits tied for third in the conference with two touchdowns on the ground this year.

Stats aside, Saturday's 22-yard scamper was as much an encapsulation of Hill's shifty speed and raw athleticism as it was representative of any MSU-centric run-concepts.

The play occurred with 2:20 remaining in the first quarter as MSU led 7-0.

Junior Osirus Mitchell lined up as the lone receiver on the left side of the formation. Sophomore tight end Geor'quarius Spivey also lined up to the left but in a blocking stance alongside senior left tackle Tyre Phillips.

Senior receivers Isaiah Zuber and Stephen Guidry stood to the right side of the formation in the slot and on the outside, respectively.

In the backfield, Hill lined up to quarterback Tommy Stevens' left in the shotgun.

The play began with Zuber motioning from right to left -- moving Southern Miss linebacker Terry Washington, who attempted to mask his zone coverage by sneaking up to the line of scrimmage, off the line into a coverage position.

Seconds later, Stevens took the snap. Handing off to Hill, the Columbus native took a few steps and looked for a hole.

At the point of attack, Spivey, Phillips and senior left guard Tommy Champion down blocked to the right. Taking the counter, Hill hit the hole off Phillips and Spivey's left shoulders.

Finding the open field, Hill quickly reached the second level of the defense.

Using his low center of gravity, the MSU running back then brushed off an arm tackle from Whittington. Re-routing, Hill turned and sprinted toward the sideline.

To his left, Champion took on a gaggle of Golden Eagles defenders as he continued to block for Hill downfield. So too did Guidry, who came flying into the play from an upfield

Approaching from the secondary, Williams led low with his shoulder to make the play.

Seeing the dip in his pad level, Hill leapt over Williams and landed just inside the 30-yard line before stepping out of bounds at the Southern Miss 27 as a chorus of cowbells exploded around Davis Wade Stadium.

"Up, up and away Kylin Hill," ESPN play-by-play analyst Kevin Brown yelled over the broadcast.

Four plays after the run, Guidry capped off the drive with an 11-yard touchdown grab from Stevens on a crossing route in the middle of the end zone.

Following the game, Hill -- who hurdled a pair of defenders in Saturday's win -- was asked if he's trying to jump over opposing defensive backs at this point.

"I don't even have an answer for that," he said through a smirk. "It's just natural.

Not the first high-flying tailback MSU coach Joe Moorhead has coached in the past few seasons, he loosely alluded to former Penn State running back and No. 2 overall pick Saquon Barkley as a runner with a skillset comparable to Hill's.

"He's been watching a lot of Saquon tape," Moorhead quipped of Hill's aerial acrobatics. "I'd rather have him hurdle somebody than get his lower body taken out. He does things that big guys shouldn't be able to do at that size so he's done it pretty well. Keep it up."

In all, Hill concluded the day with 123 yards and one touchdown on 14 carries, while he added another 19 yards on two receptions.

Currently boasting a 160-yard per game average that ranks second nationally, Moorhead offered the age-old cliche of the sky being the limit for Hill's potential this year.

"I think if he continues to stay healthy and prepare the way he has mentally and physically he's going to have a huge, huge season," he said.