Prep football roundup: Caledonia piles up yards on the ground for win over Amory 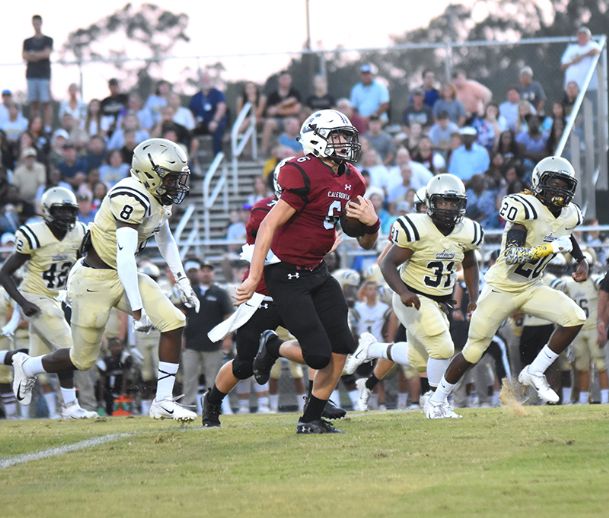 CALEDONIA -- Caledonia ran its way to success at home against Amory on Friday night.

"I'm very pleased with our kids' effort and performance," Caledonia coach Michael Kelly said. "We challenged them all week to prepare well and get themselves in a position to be better than we were the week before."

Kelly praised the Feds' defense, which held Amory to just one touchdown in the second half.

"I'm extremely proud of the way our defense played," Kelly said. "We had a lot of guys getting to the football and giving us a great chance to be successful on that side of the ball."

The two teams matched each other with touchdowns in the first and second quarters, but Caledonia scored the only touchdown of the third. Amory quickly equalized before Williams ripped off a go-ahead score of 31 yards, and Triplett sealed it with an 81-yard touchdown run.

Kewon Wyatt took one of his two carries for a touchdown, totaling 41 yards on the game.

"Offensively, I feel like our guys took another step forward," Kelly said. "Our offensive line continues to improve, and our skill players are able to have a chance to make plays."

Edmondson threw just three passes on the game, completing one to Williams for 12 yards.

The 'Feds will travel to play Heritage Academy (4-0) on Friday.

"We'll have plenty of things to correct and coach off of next week," Kelly said. "We just need to keep improving this week."

Heritage Academy piled up the offense in Friday's win over Magnolia Heights, improving to 4-0 on the season.

The Patriots had 469 total yards of offense, including 294 on the ground. Running back KJ Smith led the way with 225 yards on 19 carries and three touchdowns.

The Patriots blew out Magnolia Heights despite committing 10 penalties and losing a fumble because of a bad snap.

The Patriots will host Caledonia (2-1) on Friday in a matchup of two local schools.

SHANNON -- Noxubee County's shutout streak came to an end after 11 quarters, but the Tigers still beat Shannon 22-14 in the first road game of the season.

The Tigers were up 8-0 at half courtesy of six points in the first quarter and a safety in the second quarter, and they scored two touchdowns in the third quarter. Shannon didn't get its lone score until the fourth.

The Volunteers beat Noxapater, the second-ranked team in Class 1A, 22-7 on the road Friday.

Starkville Academy took an early lead in the first quarter but was tied with Noxapater at the end of the period. CJ Jackson gave the Vols a 13-7 lead with 4 minutes, 52 seconds left in the second quarter with a 30-yard touchdown run and scored from 19 yards out 13 seconds into the fourth quarter.

Neither time could Starkville Academy convert the extra point, but Dylan Miller kicked a 23-yard field goal with 8:15 left in the fourth quarter.

The Vols will host Magnolia Heights (2-1) on Friday.

Dallas Colom caught three passes for 124 yards, led his team in rushing and returned a kickoff 95 yards for a touchdown, but he couldn't do enough to propel Victory Christian over Russell Christian Academy as the Eagles lost Friday's home game 61-20 for their first loss of the season.

Quarterback Drake Clements went 8 of 22 for 193 yards with a 50-yard touchdown pass to Tyshon Rogers and an interception. Clements also had a 2-yard rushing touchdown, and Austin McCarter completed a two-point conversion.

Colom's six attempts for 30 yards on the ground were enough to lead his team in rushing.

On defense, Lahndon Townley led the Eagles in tackles with 10, including a sack and three tackles for loss. Nadarion Higgins was second with nine tackles.

The Eagles' next game will be at home against Delta Academy (0-2) of Marks.