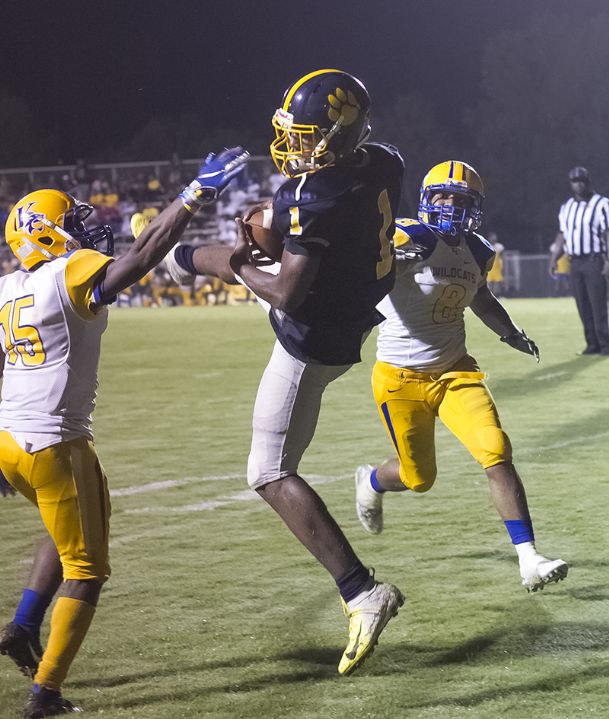 Albert Plair (1) makes the winning touchdown catch for West Lowndes in the fourth quarter against Kemper County. Photo by: David Miller/Special to The Dispatch

David Miller/Special to The Dispatch

Just two weeks ago, the West Lowndes Panthers won a game after passing just two times. Friday, against Class 3A opponent Kemper County, the Panthers abandoned that identity in favor of a game-breaking, all-or-nothing passing game.

Sophomore quarterback Marquez Shelton threw four touchdowns, including the game-winner -- a 17-yarder to Albert Plair late in the fourth quarter -- to beat Kemper County 36-34 and remain undefeated this season.

Shelton finished 10 of 21 passing for 216 yards. He had two interceptions but also added a score on the ground.

"[Kemper County] was committing to stopping and the run, and our quarterback was putting it out there," King said. "We've been waiting on this passing game to kick in. We knew we had a running game because we had a big, veteran offensive line. But we wanted that passing game for balance."

The Panthers (3-0) didn't have any semblance of balance Friday night, rushing for just 29 yards on 22 carries. But it didn't matter with Shelton at the helm, even when he made mistakes. For instance, midway through the third quarter, Shelton took a sack for a 30-yard loss after Jherquaveus Sanders returned a kick 74 yards to the Kemper County 6 yard line. He then responded with a 17-yard pass to Decamby Willis and a 23-yard fade to Plair for a score on third down to take an 18-8 lead.

Shelton was money on third down throughout the night: he brushed off Plair's drop of a wide-open pass in the end zone with an 11-yard score on to Sanders on the very next play, and the game-winner to Plair -- another fade -- came on third-and-13.

"[Shelton] kept his cool tonight," Sanders said. "He stepped up, just being a sophomore and already having a back sprain."

Sanders hauled in a pair of touchdown passes from Shelton and finished with 111 yards on four grabs. He had the long kick return and led the Panthers with 43 rushing yards, including a 16-yard score in the first quarter.

Sanders, the team's best college prospect this season, said he's grateful for the evolution of the team's offense and the opportunities it provides the team's playmakers. He said offensive coordinator Adam Lowrey, who joined the program this year, has changed many of the passing sets and concepts, namely abandoning the team's one-back sets for more empty looks. The change in philosophy also comes with increased focus on the passing game in practice, he said.

"We're always going over routes and making sure we know what we're doing," Sanders said. "It's been a great experience with coach Lowrey.

"As of right now, I just need to get more in shape and become best friends with the playbook."

The passing game proved vital to keep pace with Kemper County, whose senior quarterback, De'Onte Rush, matched Shelton with 274 passing yards and three total touchdowns. Rush, though, wouldn't get a chance to engineer a rally when Panthers freshman Javon Wilburn sacked him and knocked him out of the game with just 41 seconds left.

The Panthers had to overcome Rush, continual breakdowns in special teams -- they gave up a 79-yard kick return late in the fourth quarter immediately after regaining the lead -- and more than 10 pre-snap penalties.

They were aided, though, by Kemper County's 18 penalties for 190 yards, many of those coming on pass interference calls.

"But I'm very proud of the guys for the way they fought back against a 3A school. Our guys were dead tired, but they battled through for four quarters. They had a will to win."