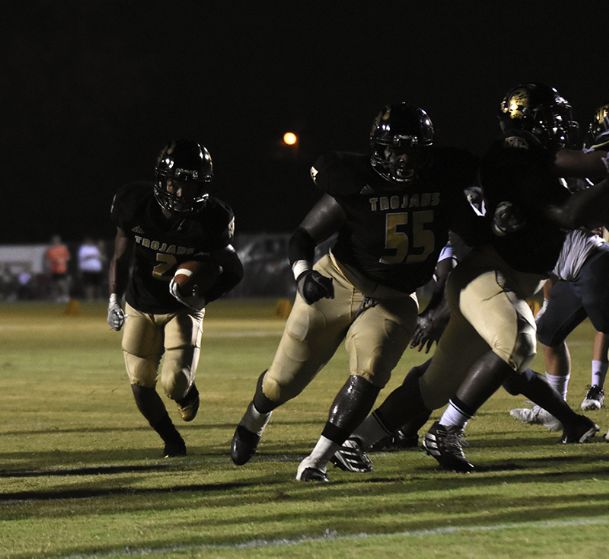 Adam Minichino/Special to The Dispatch

Ty Hardin stalked the inside of the circle.

The Houston High School football coach was none too pleased with a first half replete with dropped passes, a lack of execution, and lackluster effort.

To top it off, Hardin wasn't happy that New Hope's ground game was running roughshod over his defense.

"We came out flat," said Hardin, whose team was without seven starters due to a combination of injuries and suspension. "We let our circumstances and our environment affect us. We didn't react to it the right way. I just challenged them at halftime."

The cumulative effect of Hardin's words ultimately made the difference.

"We finally started playing Topper football in the second half," Hardin said. "It shows the heart of our guys. They could have quit very easily there. I have seen a lot of teams in years past quit. New Hope had an awesome plan. I knew they would. They really came after us."

Houston (3-0) rallied despite failing to convert all four of its two-point conversions in the final 12 minutes. The Hilltoppers actually scored on the third try, but a holding penalty wiped out the points and preserved New Hope's 28-26 lead -- if only for a few seconds.

The penalty didn't matter after Houston recovered an onside kick that deflected off a New Hope upback. The player tried to reach with his left arm for the football, but he couldn't secure it before Houston players swarmed him.

New Hope (1-2) started from its 20-yard line on the ensuing possessions, but it threw two incompletions before an interception ended the evening.

New Hope's ground assault piled up 197 yards on 25 carries in the first half. Braylen Miller had 123 of his 136 yards in the first 24 minutes, including touchdowns of 67 yards and 1 yard. Antwaan Roland added a 4-yard touchdown in a first half in which the Trojans didn't attempt a pass. New Hope didn't need to throw the ball thanks to a strong effort by an offensive line that featured R'monta Harris, Tymarius Jackson, Jeremiah Jefferson, Rayshaun Gibson, and Ricky Newby.

"We got after it," New Hope coach Wade Tackett said of his team's play in the first half. "We forced them into long second and third downs. A lot of things went right in the first 30 minutes. The problem is the game is 48 minutes. We just have to keep getting better and find a way to win these winnable ballgames that we are very much in."

But a blocked field goal in the third quarter cost New Hope its only other chance at points in the second half. Houston countered by using big pass plays to creep back into the game. The Hilltoppers used a double move on multiple occasions and took advantage of an injury to the Trojans' J'Lynn Topps, a sophomore defensive back, to fuel their comeback.

Hardin said Houston didn't change its defensive scheme in the second half. He said the Hilltoppers were better mentally and calmer so they could snuff out the Trojans' running game.

"We have tough kids," Hardin said, referring to his halftime talk. "We challenged the crap out of them, and they accepted it. I am so proud to be their coach."

Tackett also didn't see any difference in the Hilltoppers' defense in the final 24 minutes. He said his team showed growth from a loss to Shannon in which it rushed for 302 yards in Week 2, but he lamented the Trojans' inability to finish their performance.

"We played well enough again to win a football game," Tackett said. "There were little things throughout the game we changed. When Houston was down 20 they got after it. They raised their level of play, and I think we were comfortable enough being up 20. You can't be comfortable this time of year."