Four-peat on the minds of West Point 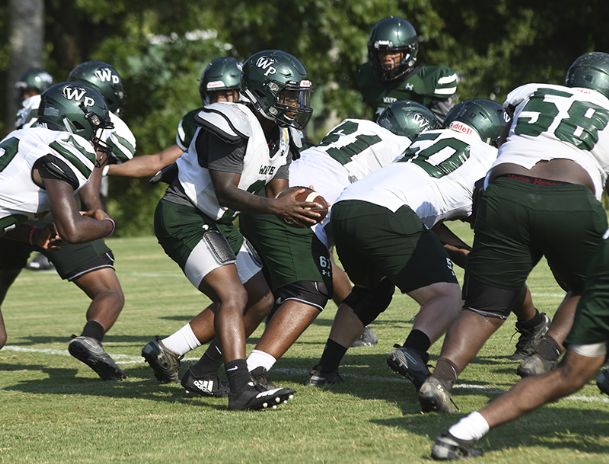 West Point running back Brandon Harris runs a play during a drill at practice on Aug. 8, in West Point. Photo by: Jennifer Mosbrucker/Dispatch Staff

WEST POINT - Even without playing a single game in their final high school football season, West Point's seniors already have a lot to be proud of.

Since those players have started high school, the Green Wave have won three straight Class 5A state championships and are 43-2 in the last three years, both defeats coming at the hands of Starkville High in non-region play.

West Point capped off its most recent title with a 27-12 victory against West Jones in the Class 5A state title game to cement a 14-1 campaign in 2018. This recent run of dominance marks the second time West Point has won three straight championships and the first time since 1987-1989.

"It seems like every year, our schedule gets tougher and the target gets bigger," West Point coach Chris Chambless said. "But our young men, they thrive in that role. It's what we preach to them every day, they can't have an off day because the target on their back is there."

"Every year I tell the kids and tell every newspaper that we're going to go as our seniors go," Chambless said. "It all depends on how our seniors want to lead and what direction they'll take us in."

If seniors will indeed make or break the 2019 Green Wave, West Point has a pretty good start with returning running back Brandon Harris, the state championship game MVP from a year ago.

"I know this kind of success doesn't happen everywhere," Harris said. "I'm just thankful I have a good offensive line that blocks for me and gets the job done. We're going to try for a four-peat."

He also occasionally lined up at quarterback in Chambless' two signal-caller offense, completing 7 of 12 passes for 145 yards and three touchdowns. Harris will be paired with senior running back Dantariyus Cannon, who was 100 rushing yards shy of 1,000 himself. Together, West Point returns a backfield tandem that helped it average 272.3 rushing yards per game.

"Brandon can do it all for us," Chambless said. "He's actually kind of a utility guy for us. He can play running back, quarterback and receiver. He plays all the skill positions and can turn around and play defense. He actually picked a pass off for us in the spring and he has a good football IQ. He understands the game and the situations. We're asking him to be a leader for us and he's getting better in that role every day."

The primary quarterback will be senior Gray Berry, who inherits the job from Jake Chambless. However, Berry is relatively inexperienced, as he only threw three passes last year.

"I think everyone knows that's what we've done the last couple years is run a two-quarterback system," the West Point coach said. "It keeps fresh legs in there but also keeps defenses guessing. Brandon is more of a runner, but he's sneaky with his arm. Gray is more of a thrower, but he's also sneaky with his legs. It's going to be fun to watch them this year."

Senior tight end Treddis Anderson may be the most reliable Green Wave pass catcher after Anderson hauled in 11 receptions for 230 yards and five touchdowns in the state championship season.

Defensively, the Green Wave lost a handful of starters, including their leader in sacks (Jaylen Cungious) and interceptions (Tyler Rupert) but still retain some of their top playmakers from the unit.

Senior Donte Smith is expected to anchor a defensive line after he came off a six-sack campaign in 2018. Smith made 36 total tackles last year, including 10 for a loss.

"We make sure everybody doesn't get a big head," Smith said. "We don't want a one-man mentality, everything needs to be about the team."

In addition, linebacker Tyron Orr is back for his senior year and hopes for an encore of his junior campaign where he totaled 66 tackles (11 for a loss), 1 1/2 sacks and one interception.

"We're looking at our seniors that have experience to step up and be coaches on the field," Chambless said. "Times are going to get tough for us at times, and it's how you face adversity during a game is how the outcome of the game will work out.

West Point opens the season at 7 p.m. Friday against Horn Lake on the road.

This story appeared in The Commercial Dispatch's High School Football Preview. For more previews on teams around the Golden Triangle, pick up a copy of Sunday's Dispatch or read the online version.