Starkville playing with championship standard in 2019 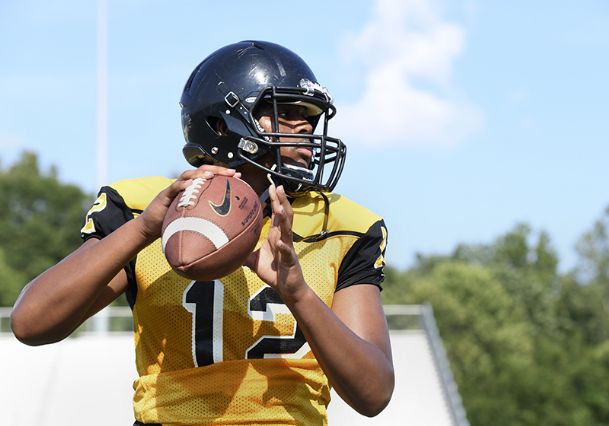 Starkville High School football player Nyjal Johnson prepares to throw the ball during a drill at practice on Aug. 7, in Starkville. Photo by: Jennifer Mosbrucker/Dispatch Staff

STARKVILLE -- The expectations are set.

Two years removed from a Mississippi High School Activities Association 6A title, coach Chris Jones and Starkville High School are prepared to return to the top of the state.

"The message is 'Finish,'" Jones said. "From everything you do in the classroom, on the field, off the field -- it's all about finishing."

The Yellow Jackets concluded last season 10-2 and will ride the arm of junior quarterback Luke Altmyer into 2019. Altmyer, one of three returning starters on offense, totaled 1,952 yards, 19 touchdowns and four interceptions a year ago.

And though he's just a junior, he has already started 21 games in his career, giving Jones an added set of eyes on the field.

"It's one of those deals where he's mature for his age," Jones said. "He's a young guy, but he's handled it well. He's always humble. He's not big-headed."

With another year to grow, Altmeyer has also added significant weight to his frame. He currently stands 6-foot-2, 190 pounds -- up 1 1/2 inches and 15 pounds from last year.

"It's kind of been natural," Altmyer said of how the growth spurt has affected his game. "I'm only 16 years old, so a lot of change going on right now, but I'm drinking a lot of protein shakes, making sure I'm eating all my meals and just going with the flow."

Beyond the on-field impact Altmyer brings, his recruiting profile has climbed tremendously over the summer as well -- picking up an offer from LSU following an unofficial visit to Baton Rouge in March.

"When that came in I was kind of shell-shocked," he said. "All the hard work, I've been working towards that kind of offer but it's just amazing."

Altmyer's task does become a touch more difficult this season as Starkville replaces three starters along the offensive line.

"We're putting the pieces together," he said of the youthful unit. "Just trying to give those guys confidence and motivation every day. Obviously we don't have a lot of experience, but I think we'll be fine. We are Starkville -- we reload every year."

And while the offensive line will undergo some changes, Starkville returns the bulk of its receiving corps. Senior Rufus Harvey -- who led the team with 935 yards in 2018 -- is back alongside second-leading receiver senior Jatavious Lucious.

Classmates Josh Aka and Orien Thompson will also add depth behind Harvey and Lucious.

"We're picking up the tempo this year," Aka said. "Of course we lost a lot of good guys from last year but I still feel like we're one of the best offenses in the state."

As Jones noted, Starkville has become a staple of excellence in MHSAA 6A football over the past decade. That said, the Yellow Jackets are again poised to compete for a state title in 2019 despite a new wave of talent.

"We can preach and teach all we want as coaches," Jones said. "But until they actually get out there by themselves that's going to be the determining factor in how much better they can get."

This story appeared in The Commercial Dispatch's High School Football Preview. For more previews on teams around the Golden Triangle, pick up a copy of Sunday's Dispatch or read the online version.