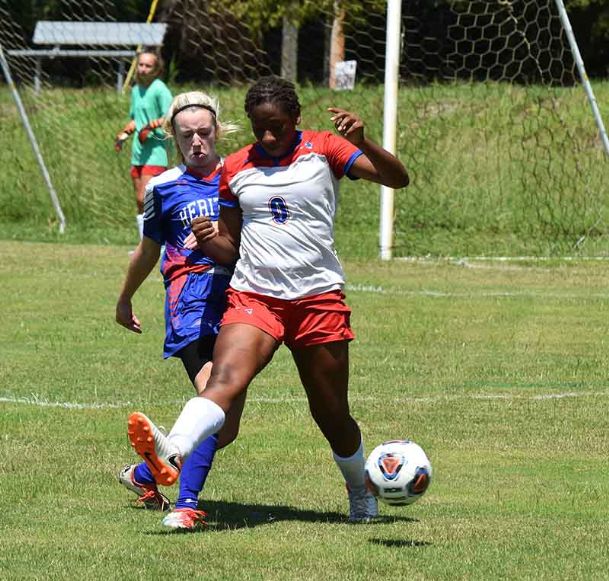 A yellow van slowly crept behind the far goal at the River Walk Soccer Complex Saturday.

With a fixed shelf of flavors and the words 'Snowies Shaved Ice" emblazoned on its side, the cool treat dotting vehicle pulled up alongside the fields.

As fans gathered around the van for a cooling treat to combat the 95-degree temperature, the Heritage Academy girls soccer team remained red hot on the field as it raced to a 10-0 victory over Marshall Academy.

"I feel like we really played together," senior center midfielder Lizzy Howard said.

Howard led the scoring onslaught, notching three goals on the afternoon. A team captain and four-year starter, she showed graceful finishing prowess and a deadly outside shooting range throughout.

After scoring the opening goal of the contest, she received a through ball from the right back. Racing through her defender, Howard took a dribble and hammered home a shot from just outside the 18-yard box into the top left corner.

Howard capped off her hat trick when she again raced through the Marshall Academy defense before sending home a right-footed shot off the left post and into the back of the net.

"The great thing about her is that she has a great eye for when to distribute the ball and when to take those shots from about the 18," Heritage Academy coach Tom Velek said. "...Mark her and the ball is going somewhere else. Don't mark her and she'll make you pay."

Fellow captain and classmate Taylor Phillips also notched a goal as she cashed in from close distance to send Heritage Academy into halftime with a 6-0 lead.

Outside of Phillips and Howard, the Patriots received ample production from their corps of youngsters. Seventh grader Caroline Peal and eighth graders Chloe Boyd and Emma Britt each added a goal apiece on the afternoon.

"The last three years, we've lacked depth," Velek said. "We've been able to put 11 really good players on the field and then the next one that went on is a drop off in production. What was really nice today and in some of the previous games, we're circulating 5, 6, 7 players on."

Following last season's disappointing one-goal loss to Bayou Academy in the state semifinals, Velek's motto to this year's squad has been "One goal, no excuses."

With their adage in tow, the Patriots have responded with a vengeance to open the 2019 season -- sitting at 5-1 with their lone loss coming 1-0 at Washington High School in Greenville.

Further, Heritage Academy has outscored opponents 34-3 over the year's first six games -- a testament to the Patriots' balanced scoring attack.

"It's like playing whack-a-mole," Velek said of his offense. "As soon as you shut down one, here comes another scoring threat at you."