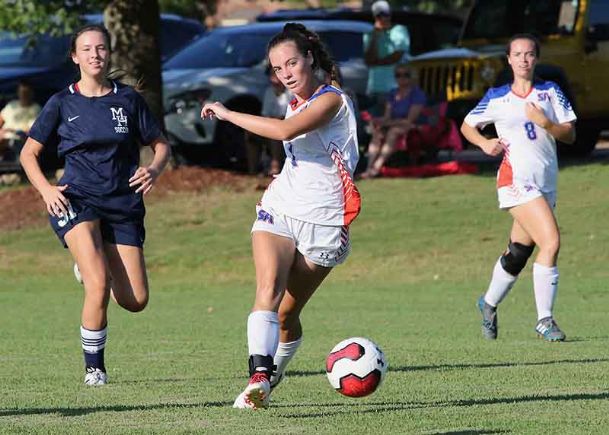 Starkville Academy's Kaitlyn Bock (1), center shoots a goal ahead of a Magnolia Heights defender during the first half of their soccer match Thursday afternoon in Starkville. Photo by: Jim Lytle/Special to the Dispatch

"Remember, everyone watch the game!"

The Volunteers (1-3) didn't necessarily need to be reminded their game against Senatobia-based Magnolia Heights (0-4) was seconds from kickoff. Rather, it was a hint for the wandering, youthful minds along the bench to keep focused throughout.

Boasting a roster with just two seniors and 10 seventh and eighth graders, Starkville Academy is desperately lacking in experience. It didn't matter Thursday as the Volunteers raced to a 5-0 victory over the Chiefs.

"It hasn't been as much of a struggle as most people would think," Starkville Academy coach John Morgan said. "And I think a lot of that has to do with the leadership that we have. I think the young girls really look up to the older ones and the older ones are really taking the banner and saying, 'Hey, follow me.'"

Sideline antics aside, the Volunteers offered an offensive onslaught in the opening half of action.

Freshman Riley Dowell notched the first goal of the afternoon as she corralled a caroming ball in the middle of the box. Taking one dribble and firing -- Dowell sent the ball past the goalie and into the right side of the net.

Along the bench, adolescent minds meandered a touch in between scores.

Entering the middle stages of the first half, junior Kaitlyn Bock doubled the Volunteers' lead.

As seventh grader Macie Reed tore down the far sideline, a Chiefs defender poked the ball away. Stopping and collecting, Bock gathered the loose ball. Unmarked entering the penalty area, she smoked it into the bottom left corner of the goal. 2-0.

Bock also notched the third goal of the frame as she possessed another loose ball. Sending a floating shot toward the center of the cage, the ball lifted just over the outstretched hands of the Magnolia Heights keeper to put the game out of reach.

Following a second half break, Bock slid into goal for the final few minutes of the game as starter senior Meri Laci Archer moved into the field.

"I love playing every position," she said. "I can play anywhere that coach asks me to. I don't mind."

The Volunteers added two more goals in the second half. Sophomore Anna Clair Heflin scored the first of the frame, striking a right-footed ball from the top left of the box into the top right corner.

The final goal of the day came from Dowell, her second tally of the match, off a corner kick delivery from Heflin.

After dropping their first three games of the season to reigning state champ Pillow Academy, state semifinalist Lamar and perennial power Jackson Academy, the Volunteers are stepping into their own.

"Those are powerhouse schools," Morgan said. "But it's a chance for a lot of these young girls to dive into the fire and build."

With the victory Starkville Academy marches into next week's rematch against Magnolia Heights with another game of experience in tow.