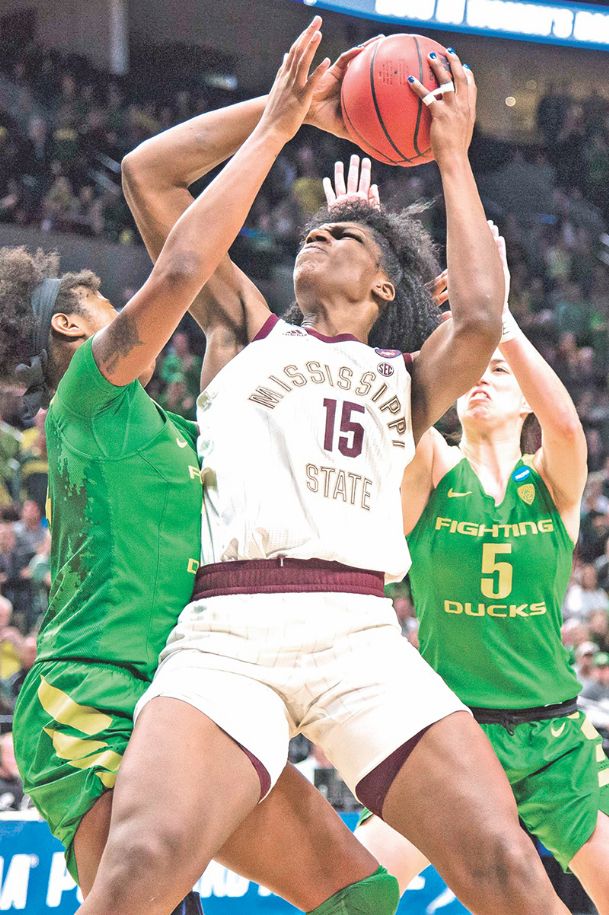 WASHINGTON, D.C. - Teaira McCowan made a name for herself in the Humphrey Coliseum where she blossomed into a star-studded center behind her 6-foot-7 frame and skillset.

Now, her dominance is only growing at the next level.

On April 10, the WNBA's Indiana Fever selected the Mississippi State center as the third overall pick in the 2019 draft. Indiana coach Pokey Chatman observed McCowan's performance around the rim and felt she'd add to the front court depth of a team coming off a league-worst 6-28 record in 2018.

"She could impact our team by being a presence in the paint with her ability to alter shots, block shots, rebound and get us extra possessions because she's a good rebounder," Chatman said. "I thought the offense would come because it's a different league."

Upon leaving Starkville, McCowan didn't have much time to get adjusted to her new surroundings. Just 34 days separate the WNBA Draft from the start of the preseason and McCowan only had nine practices before the season began.

"It was kind of a whirlwind," McCowan said. "Got right into training camp and it was hard. Transitioning from college, the pace is just so different."

Though she won't be seeing the floor after tearing her right anterior cruciate ligament overseas on Israel's team, Maccabi Bnot Ashdod, Vivians still gave McCowan words of wisdom about being a rookie and its tumultuous transitions.

"She said this year was going to be a lot," McCowan said of Vivians' advice. "You're not going to be perfect this year, even as much as I want to be perfect. She's been there, telling me it's okay when I'm too hard on myself."

McCowan averaged 18 points and 13 rebounds in both her junior and senior years at MSU and now she's helping answer questions regarding Indiana's struggles in the paint. Aside from rebounding, McCowan assists Indiana forward Candice Dupree in scoring on diverse parts of the floor and activates double-team defense with her. Considering her height, passing out of the post is one of McCowan's key attributes. She's able to kick it out to Fever guards Tiffany Mitchell, Erica Wheeler and Kelsey Mitchell, but McCowan wants to add more things to her arsenal than under the rim talent.

"I want to finish like I did at Mississippi State," the 2019 SEC Player of the Year said. "I want to pursue every rebound. I would say on defense, just keep track of the ball and keep up with my teammates on both ends of the floor."

After starting 75 games straight, she was listed as a reserve behind teammate Natalie Achonwa. When her name was called to make her way to the scorer's table, McCowan remained the impactful player she's always been during her first professional game. Indiana visited the New York Liberty for a matchup to open the season May 24 and McCowan didn't flinch, battling low against New York's Tina Charles. She beat the final buzzer, banking in a shot off the glass for a road 81-80 win as time expired. Her first stat line ended with 11 points, along with five rebounds in 14 minutes.

McCowan's debut helped set the tone for a rich rookie season. The Brenham, Texas native made her first career start against the Atlanta Dream on June 19, finishing with her first professional double-double of 15 rebounds, 14 points and five blocks. She eventually broke the Fever single-game rebound record a month later with 16 boards against the Chicago Sky on July 21.

Currently, McCowan averages seven points, eight rebounds and 20 minutes this season. Her legacy of being a "double-double machine" is being resurrected, as she has five this season. The next steps in McCowan's career are becoming a consistent center Indiana can call on.

"I'm learning each day," McCowan said. "I'm learning how the (pick and roll) is different here. They want me to roll all the way to the basket. I read it differently, and I can get caught up in that sometimes."

McCowan will be a big part of Indiana's defensive approach with nine games remaining. She's sixth in rebounds per game in the league in restricted minutes. Indiana's final stretch includes a rematch against the first-place Washington Mystics, two matchups with the third place Los Angeles Sparks and one against the preseason favorite Las Vegas Aces.

Eight teams qualify for the WNBA playoffs and Indiana is just out of range at ninth place. The Fever are two games behind the Phoenix Mercury, who hold a 11-12 record. Indiana is 9-16 overall, but the team has still passed its win margin from last year by three wins.

Indiana's final stretch in pursuit of a playoff spot will be a tough one, but securing a postseason berth will put a cherry on top to McCowan's already promising rookie season.