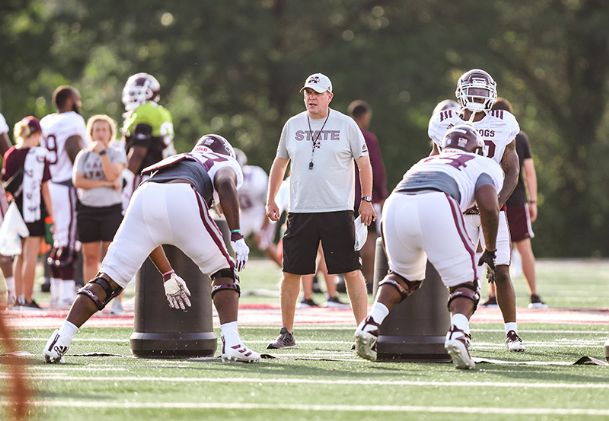 An economics major at Yale during his playing days, he's as intelligent as coaches come.

And while football verbiage has become the base of his profession as opposed to charts and graphs, Shoop's analytical approach has carried over to the MSU defensive backfield -- most notably when it comes to forcing turnovers.

"Takeaways are on defense, turnovers are on offense, so we call them takeaways," he said. "And we want to take the ball away," he said.

Wording aside, Shoop's sentiment remains as the Bulldogs finished fifth in the SEC in takeaways last season despite boasting first round picks Montez Sweat, Jeffery Simmons and Johnathan Abram.

With all three off to the NFL, MSU must reload while also improving its tenacity in taking the ball away.

"Our mantra on everything we give to the players is H.T.B. -- 'hunt the ball,'" Shoop said. "We studied techniques this offseason to do a better job stripping the football. We've done a good job trying to work on ball skills and things along those lines."

Where MSU does stand to improve in the turnover department is the secondary. Despite the loss of Abram, the Bulldogs return the bulk of last season's pieces in the defensive backfield.

"The secondary has gained so much potential and confidence from last year," senior safety Jaquarius Landrews told The Dispatch. "We have a whole bunch of people stepping up behind us and we're all sticking together, making plays and we're all over the field."

Senior Brian Cole has carved a niche as a nickel corner after transitioning from receiver to defensive back over the past few years. Finally healthy from an upper body injury that deprived him of all but four games in 2018, he's primed for a breakout season.

"If anything, I'm slowing things down," Cole said of this offseason versus last. "I'm more locked in and I'm working more on my techniques on how to guard certain players or getting better in my curl flat coverage drops. Everything is just at a technical standpoint now."

MSU also brings back ball-hawking cornerback Cam Dantzler. A recent father, Dantzler has seen his maturity increase over the offseason as he prepares for what will likely be his final season in Starkville assuming the stats reflect his talent.

"He changed my whole demeanor," Dantzler said of his son. "He's my everything. From now I can't just (play) for myself, I have to do it for him."

Then there's Landrews and senior cornerback Maurice Smitherman. The duo has combined for 46 games played in four years of action between the two entering 2019.

Landrews, who played second fiddle to Abram a year ago, should anchor the safeties after totaling 21 tackles, three sacks and five passes defended last season.

Smitherman figures to be the No. 2 corner alongside Dantzler. He notched 23 tackles, one interception, one forced fumble and three pass breakups in 2018.

"I feel like this year it's really going to be 'DB-U,'" Landrews said.

Despite boasting the No. 1 total defense in the country last season, Shoop's feelings toward turnovers are valid.

In 2018 the Bulldogs ranked No. 26 nationally in turnover margin and No. 33 in interceptions. And while those numbers look solid on paper, MSU ranked fifth in both categories in the SEC. It also sat tied for 12th in the conference with seven forced fumbles.

"The reason I say (turnovers are) a great equalizer is the takeaway game can turn a bad defense to good and a good one to great and a great one to become a championship one," Shoop said. "I think that's an area for growth with our guys, we acknowledge that."

So while the Bulldogs defense was dominant last year, takeaways may take this year's from, in Shoop's words, a great one to a championship one.

"There's a standard of play when you're at Mississippi State with regards to defense," Shoop said. "It was here long before I was here. We hope to continue that standard of play. The names and the faces may get a little different, but the standard remains the same."