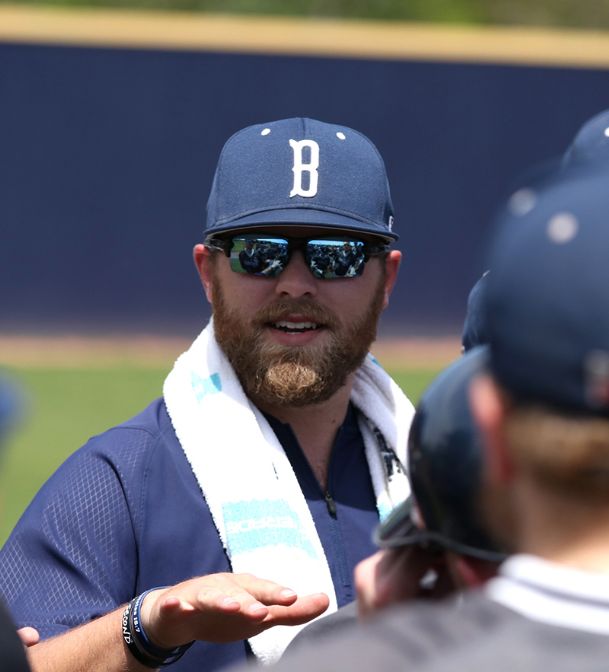 Following a productive conversation and a few other candidates, an offer was made.

Ranked among the top high school players in Mississippi, he was a three-time all-state selection at Hamilton High School and a former Louisville Slugger All-American.

With collegiate options that spanned the country, Reeves settled on coach Mike Bianco and Ole Miss.

Heading down Mississippi Highway 45, Reeves arrived at EMCC. Born and raised in Hamilton -- a town of just 371 people 19 miles north of Columbus -- Scooba mirrored his hometown.

"I didn't even get to Macon headed back home, 30 minutes away, before (I committed)," he recalled. "It just felt like home to me."

Returning a bulk of the team's 2013 production, Reeves and company guided EMCC to a 32-13 record -- including a Mississippi Association of Community and Junior Colleges North Division regular season championship.

Individually, he tied for the team lead in home runs (6) and ranked first in RBIs (32).

"That group just never quit," Reeves said. "It didn't matter whether we were down 1-0 after the first inning, we knew we were going to have our time."

After finishing at EMCC, he concluded his collegiate career with an injury-shortened stop at Southern Miss and a fifth-year senior season at Blue Mountain College in 2016.

He also spent the past three seasons as an assistant for the Toppers.

And while on-field excellence persisted during his time in Scooba, EMCC further impacted Reeves off it.

Assembled at a student gathering, he noticed Rachel Clay across the room. The two were familiar with one another but not close. They got to talking.

"We had class together but we never talked," Reeves said through a smile. "There was one night everybody was hanging out and I was kind of like 'I'm going to take a shot.' One thing led to another and next thing you know we were dating"

Reeves and Clay have been married almost two years now.

EMCC enters 2020 with hopes of a turnaround. The Lions finished last season 11-30 and 8-20 in conference play.

For Reeves, the year brings promise -- one in which he can hopes to return his alma mater to the championship standard he helped bring to Scooba just five years ago.

"I'm just very excited to be back and getting (EMCC) to be where it can be," he said.