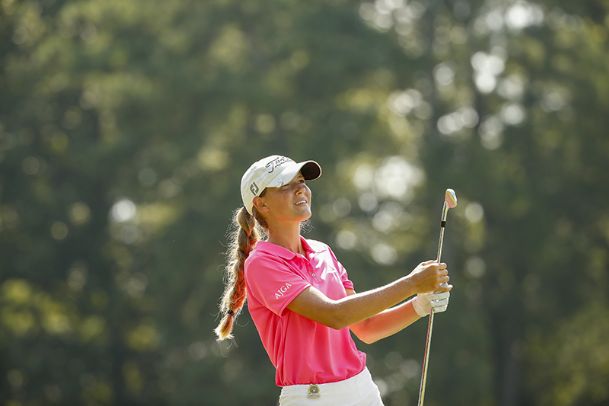 MSU's Ashley Gilliam fell on the third playoff hole Wednesday in the round of 64 match at the U.S. Women's Amateur at Old Waverly Golf Club. Photo by: Steve Gibbons/USGA

WEST POINT -- Ashley Gilliam began the long walk back to the clubhouse.

After 21 holes, temperatures that reached 90 degrees and a near miss, Gilliam fell on the third playoff hole to Katie Chipman in Wednesday's round of 64 match at the U.S. Women's Amateur at Old Waverly Golf Club.

"One of my goals coming into the week was to make the cut," Gilliam said through a choked voice as tears formed in her eyes. "But it's really disappointing not to make it to the round of 32. It's a good learning experience."

Gilliam, an incoming freshman at Mississippi State, held a 1-up advantage heading into the final three holes of the day. She bogeyed No. 16, courtesy of a slightly wayward tee shot and a second ball that landed in the thick rough short of the green.

Chipman took the lead on the par-3 17th after nestling her first shot within four feet. Gilliam pared to put the pressure on the Grand Valley State product but to no avail. Chipman drained her birdie putt and headed to the final tee box needing to just halve the final hole for victory.

Drama ensued on the 18th. Chipman sent her tee shot into the water down the left side of the fairway. She then fired her replacement ball into the rough along the left side and put her fourth shot into the sand trap guarding the front left of the green. Chipman ultimately conceded the hole when Gilliam reached the green in two shots with a safe drive and slick iron shot from the fringe.

Following the tie, the duo headed to hole No. 1 for a playoff. Gilliam had a chance to end the match on the first green with a four-foot putt from above the cup after Chipman, who struggled putting all-day, clanked home a 16-footer for par.

Gilliam missed the ensuing putt -- extending the match to a second playoff hole. Both players pared No. 2 with relative ease before Chipman took the match at No. 3.

"It's a little disappointing," Gilliam said. "I wasn't hitting my driver very well, I had a lot of shots that ended up in the rough and out here you can't really go for pin out of the rough."

The Manchester, Tennessee native was the lone Bulldog in the field of 156. She advanced to the match play portion of the tournament after firing an even-par 142 between the first two rounds of stroke play -- placing her tied for 21st.

As Chipman and her gathered friends and family boarded golf carts headed for the clubhouse just off the third green, Gilliam, her father, Marshall, and MSU assistant coach Kourtnie Maxoutopoulis traded words.

The trio wandered down the meandering cart path at a steady pace. Maxoutopoulis reassured the 18-year-old of her performance -- one that offered glimpses of brilliance while also demonstrating how a pressure-packed atmosphere and a handful of minute mistakes can take their toll on a youthful player.

In just a few short weeks, Gilliam will begin her career with the Bulldogs. Endless practice rounds and qualifying tournaments await at Old Waverly -- MSU's home course -- over her next four years. But Sunday, the pain of defeat proved overwhelming as a chance at advancing agonizingly slipped by.

"In golf you're going to lose matches," Gilliam said, still teary-eyed. "You just have to learn from it."