From 'Last Chance U' to one last chance: Rivers prepping for breakout year 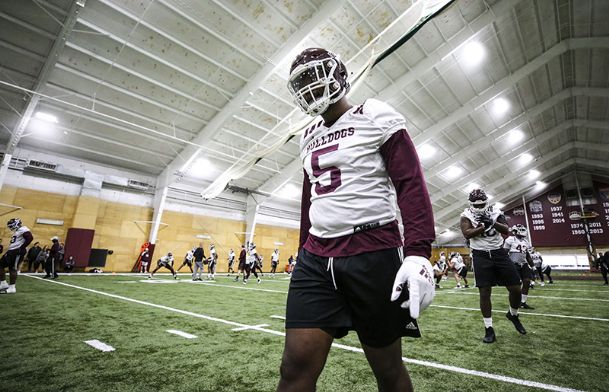 Mississippi State defensive lineman Chauncey Rivers is expected to have a big role on the defensive line this upcoming season. Photo by: Photo courtesy of MSU athletics

Following a meandering career that began at Georgia, took a pit stop at East Mississippi Community College, and found its way to Starkville -- 2019 marks the redshirt senior's final season to realize his vast potential.

"I'm right where I want to be," Rivers said.

His winding road reached rocky footing in May 2016, when he was kicked off the team at Georgia after a third marijuana arrest in seven months.

Rivers then landed at EMCC under the direction of coach Buddy Stephens.

Stephens has made a living out of taking previously cast off Division I transfers and rebranding them at the junior college level over the last decade. Rivers became living proof of the method.

"When he first came here, you knew he was really talented," Stephens told The Dispatch. "We've had a lot of guys that have gone on and played in the NFL and you saw that type of ability in him and you knew that it was there."

During the 2016 season, he totaled 45 tackles, eight sacks and one forced fumble in 12 games as the Lions finished 11-1 with a 27-17 win over Kilgore College in the Mississippi Bowl.

"He was young and needed that experience," Stephens said. "He's just needed the opportunity to perform and he's done well with that."

After his lone standout season at EMCC, one that was featured on the Netflix show "Last Chance U," Rivers committed to MSU Dec. 14, 2016 -- just 10 days after the season closed.

Despite the on-field prowess, Rivers was deemed academically ineligible due to an issue then-MSU head coach Dan Mullen attributed to EMCC. He missed the entirety of the 2017 due to the error.

Rivers was again left waiting in the wings.

"That redshirt year was an excellent year for me just learning the game of football," he said. "...It all played out to how it is today."

Once eligible, he played a sporadic role behind All-American Montez Sweat and team captain Gerri Green in 2018. Limited role aside, Rivers was effective -- totaling 24 tackles, seven for a loss, and 2 1/2 sacks while appearing in all 13 games.

He also still actively seeks out advice from Sweat -- now with the Washington Redskins.

"We talk all the time," Rivers said. "He just gives me tips on what I can do and how I can better my game and elevate."

Entering 2019, Sweat and Green are off to the NFL. So too is interior defensive lineman and first round pick Jeffery Simmons.

Alongside juniors Marquiss Spencer and Kobe Jones, this year's unit is Rivers' to anchor given just four of the 10 defensive linemen on the roster are upperclassmen.

"The way I can be most impactful is helping the young guys out," he said. "Just to put them in a better position, give them the most knowledge I can and just help them out so we can be the best unit in the country."

Rivers' teammates are prepared for his increased role this year too. Junior linebacker and captain Erroll Thompson sang his praises during Tuesday's media availability.

"He's a beast, he's a dog," Thompson said. "He's being that vocal leader by example as well."

Having lost nearly 15 pounds, Rivers is down to a playing weight around 260 and thrice echoed Tuesday he is in the best shape he's ever been in -- granting him an improved frame that will only boost his astounding athleticism.

"He can run like a deer he's so dag gum athletic," Stephens said. "From the first time you saw him do a pass-rush drill you knew he had a lot of agility and he had a lot of quick twitch in his muscles."

In four years, Rivers' career has been marred by tumult. But the one-time Last Chance U star is prepared to make good on his final collegiate opportunity.