Call from a legend: How Tommy Stevens found mentors in Archie and Peyton Manning 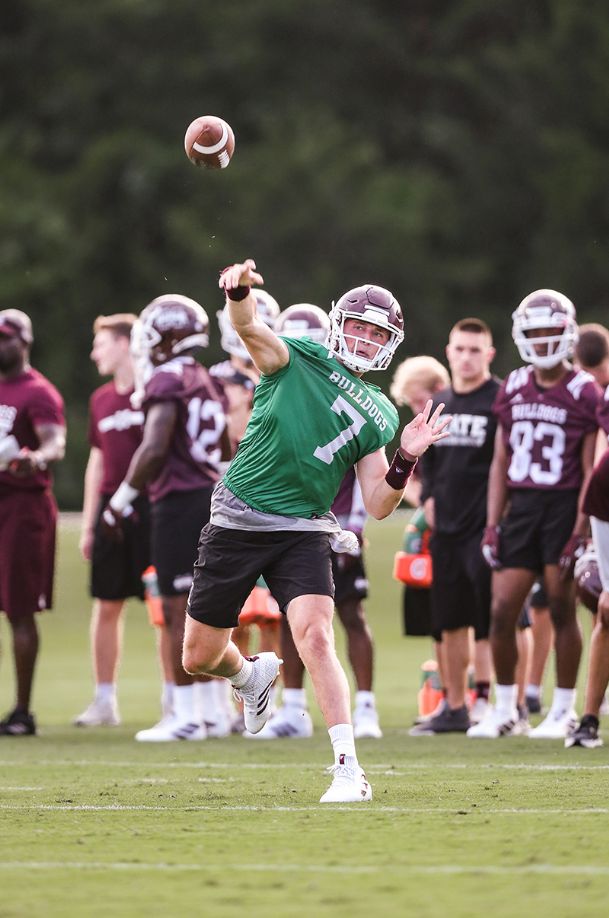 STARKVILLE -- Mississippi State quarterback Tommy Stevens was in the shower when his phone rang.

Checking his notifications, Stevens listened to the voicemail that had been left.

"I had no idea what the number was," Stevens told The Dispatch. "Pull it up and it's a voicemail from Archie Manning. I about dropped my phone in the sink."

He returned the call shortly thereafter, only to find out the former Ole Miss legend had invited him to be a counselor at the prestigious Manning Passing Academy in June at McNeese State.

"He was awesome," Stevens said of Manning. "As good of a man as I've ever met and couldn't be thankful for the Manning family for letting me be a part of something like that."

For years, the former Penn State signal caller wanted to attend the MPA as a collegiate quarterback. He previously took part in the camp as a junior at Decatur Central in Indianapolis despite not having any college offers at the time.

Learning from stars like Alabama's AJ McCarron and Heisman Trophy winner Marcus Mariota, Stevens cherished the opportunity to participate as a prep player.

With his previous experience in tow, this summer marked his chance to showcase his talent and give back to the next crop of elite high school quarterbacks -- albeit not without a slight hiccup.

Stevens gave Manning a call when he entered the transfer portal in April. Worried he may not be able to attend the camp given his future was in flux, Manning reassured Stevens of his spot.

"I did the camp as a junior in high school, my brother was signed up to do the camp too, so it was something I wanted to be at," Stevens said. "(The Mannings) were great. All the way first-class organization, first-class family. I can't say enough good things about them."

Though the MPA ran from June 27-30, Stevens announced his commitment to Mississippi State in mid-May. When Manning caught wind of his pledge, the former Rebel quipped he might have had to rescind his invitation.

"He said, 'Mr. Manning, I'm going to Mississippi State,'" he recounted. "I said, 'Woah we're going to have to think about that now.'"

Of course, Manning spent three seasons under center in Oxford, finishing third in the Heisman Voting his senior year despite playing just eight games due to injury, while son Eli held the school record for most offensive yards in a career from 2003 to 2014.

"Tommy is an impressive guy," Manning told The Dispatch. "He is a fine young man and a big kid. Threw the ball really well and I guess he just hadn't played a lot."

For Stevens, the four-day event was an opportunity to replicate the collegiate quarterbacks he looked up to as a high schooler, not to mention a chance to razz his brother, Aycen -- a camper at this year's MPA and a freshman at Decatur Central.

"But just being able to give back in a way and somewhat help kids feel the way that I felt -- I remember I loved the camp and I hope I that I was able to have some sort of impact for those kids too."

Following the MPA, Stevens expressed his gratitude toward Archie and the Manning's in a text message to the elder of the three.

"I can't remember him exactly what I sent to him, but I do remember texting him the day after I got home after kind of reflecting on it and realizing the opportunity that I had," he said. "...I knew once I got to this level it was something that I wanted to do and it was a goal of mine and was glad to be able to do it.

"I thanked him for allowing me to come and being great to me and my brother and my family and just if there was anything I could do in the future to let me know."

Today his relationship with the Manning family persists. Stevens stays in touch with Peyton, a future Hall of Famer who spent 14 years with the Indianapolis Colts, wracking his brain for tips as he competes with junior Keytaon Thompson for the starting quarterback role in Starkville.

"I grew up idolizing the man," he said. "Just to be able to hit him up at any time is really cool. I never really would have thought that growing up in Indianapolis and loving Peyton. It was a great experience and couldn't replicate it anywhere else."

And for as grateful as Stevens was for the opportunity to attend the MPA, the same can be said for Archie and the Manning clan.

"He's a great young guy," Manning said. "We had fun with Tommy. I think he really enjoyed his time there."