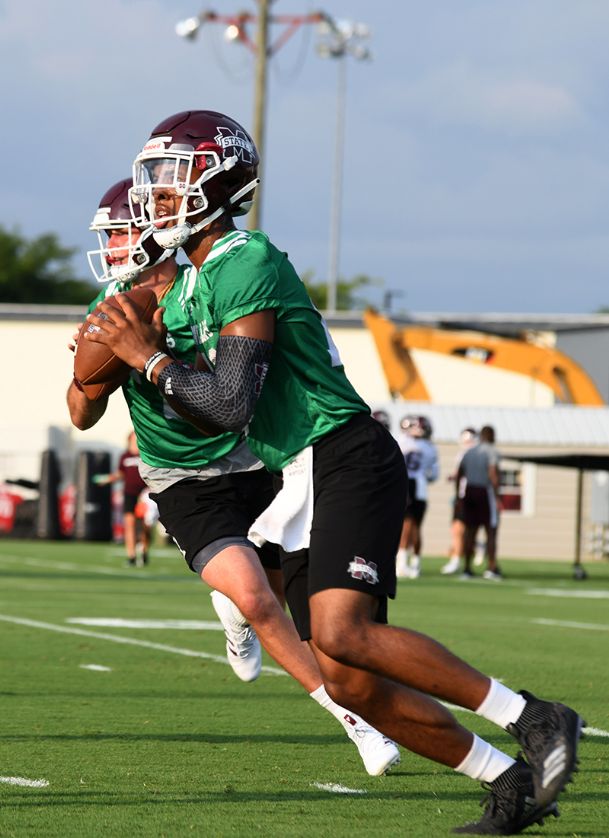 As recently as MSU's spring football game in April, the 6-foot-4, 225-pound junior signal caller seemed to have a firm grasp on the starting quarterback job.

Now, he'll have to beat out graduate transfer Tommy Stevens in fall camp if he wants to line up under center in MSU's season opener against Louisiana on Aug. 31.

And Thompson doesn't plan on backing down.

"There's always competition," Thompson told reporters Monday. "You always want to go out there and get better every day, regardless of if you're first, second or third string."

Stevens announced his intention to transfer to MSU from Penn State in May, a move Thompson and the rest of the quarterback room knew was possible.

"Our coaches let us know ahead of time he may or may not be coming in," Thompson said.

Reading between the lines, all signs point to Stevens as the frontrunner to start Week One considering Stevens only has one year of eligibility remaining and spent two years learning coach Joe Moorhead's system when Moorhead was an offensive coordinator at Penn State.

But publicly, Moorhead says the quarterback competition is wide open.

Fall camp opened Friday evening, and Stevens and Thompson rotated reps between the first and second team in different drills. The timeframe for either to make a significant impression on the coaching staff is narrow, as Moorhead has said he'd like to name a starter at least 10 days before MSU's opener.

Nonetheless, Thompson isn't putting any extra pressure on himself. For now, Thompson said he's only focused on self-improvement and how far he's come along in Moorhead's offense since last fall.

"It's totally different for me. I feel much more confident with the offense," Thompson said. "With the installs, I've seen them before and I know most of them. I'm much more comfortable and it's a lot better feeling."

MSU's leading receiver from a season ago, Stephen Guidry, said he's noticed a tremendous difference in Thompson from 2018 to 2019.

"He's gotten way better," Guidry said, noting both Thompson's throwing and rushing mechanics have improved. "It's his time and he's got a lot going for him."

While both Stevens and Thompson are competitive by nature, there hasn't been any animosity between the two players.

"Tommy is a great guy and a great quarterback," Thompson said. "With him being in Moorhead's offense for as many years as he was, it's likely we'll have certain tips for each other on different plays."

"I think it's important to have that dynamic," Stevens said. "I can relate it a lot to when myself and Trace McSorley and I were battling for the quarterback job at Penn State. If all of us can work together and can help whichever one of us is the starter, that's the most important thing, I think."

At SEC Media Days, Moorhead said since Thompson and Stevens are relatively similar as a runner, he'll start the better passer of the two. It's possible the non-starting quarterback will still see the field in some other capacity, considering Moorhead occasionally runs plays featuring two signal callers.

The 6-foot-5, 235-pound Stevens played 20 games in three years for Penn State and only threw 41 passes. Yet, he completed 58.5 percent of them and threw four touchdowns to one interception, while averaging 7.4 yards per attempt. Meanwhile, in 16 games over two seasons, Thompson has completed just 46.6 percent of his 105 attempted passes, but has averaged 8.1 yards per attempt. Last season, Thompson only completed 18 of 39 passes, but a third of the completions resulted in touchdowns.