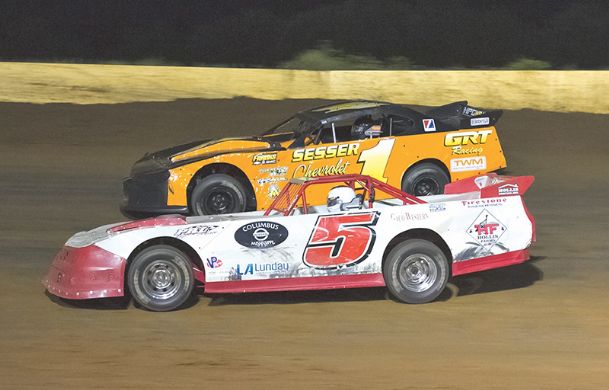 Johnny Stokes (1) holds off Jason Hollis on the next-to-last lap of the Mississippi Street Stock Series $1,000-to-win feature Friday at Columbus Speedway. Photo by: David Miller/Special to the Dispatch

Johnny Stokes knows Columbus Speedway like the back of his hand.

The often-used idiom may still be an understatement for Stokes, who "cut his teeth" at the track when he was just 15 years old. He also spent 10 years as the track's promoter.

"That's how the folks gave it the name 'The Baddest Bullring in the South,'" Stokes said. "I've just got so many laps on it."

"More than anything, it's good to come out here and run with these young folks, me being 65 years old," Stokes said. "I do it for fun. We don't race a lot. We go to win when we do - it doesn't always work out that way, but we're just having fun."

Stokes took the lead on the first lap, passing pole-sitter Lee Ray. He opened up several big gaps on the field and shook off a few re-starts before getting a late push from Jason Hollis on laps 19 and 20. A late spin by Dusty Dupler in turns 1 and 2 reset the field, and Hollis, who'd spent considerable time battling on the low-side with Lee Ray for second, went door to door with Stokes at both ends of the track. Still, Stokes put another car length on Hollis on the final lap.

Hollis finished second, while Boland, Ray and Jamie Sudduth rounded out the top 5.

"I should have slid him down there in (turns) three and four," Hollis joked after the race.

Stokes said he "messed up a little bit" in turn 4 of the last restart by hitting a rut and leaving a lane for Hollis.

"It made me push a little bit," Stokes said. "But when I got it straight, I knew I'd be alright. With these crate motors, it just takes three or four laps, and if you hit your marks, you start stretching out."

Hollis' runner-up finish was his third in as many weeks between both Columbus and Magnolia Motor Speedway. He is currently third in MSSS points.

Hollis lamented the condition of the race surface Friday and was frustrated with the difficulty to pass. He said the track "wasn't good for racing," but said it was "better than I thought it would be."

"Track position means so much here," Hollis said, "and you're racing against a guy that's made more laps around here than anybody in the world."

Ray echoed those sentiments and the importance of positioning at Columbus.

Still, Ray was more than satisfied with a fourth-place finish and no damage to his car.

"The car just quit going up there on that top side, getting in all that loose stuff," Ray said. "Then Jamie and me got to running down there on that bottom. I still had a good car. It's the best I've run in a while, so I ain't complaining."

Full results were not available by press time.