Giraffes, gazelles, oh my: Moorhead gives a peek inside the MSU playbook 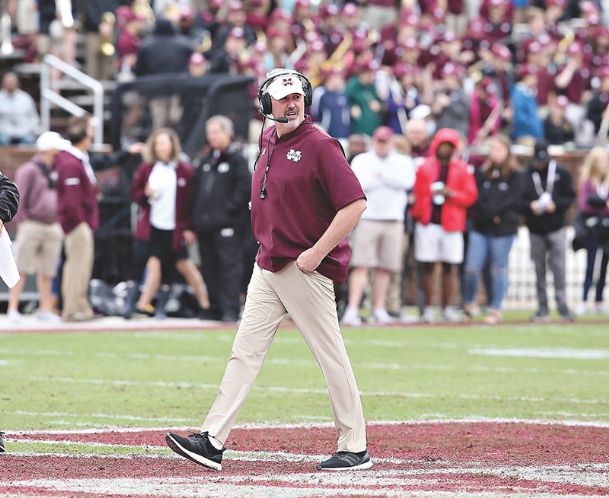 From outlandish play cards with pop culture references to assistant coaches holding up towels behind coordinators as they signal in plays to block camera angles that could steal the signs, teams are hell-bent on keeping their ins and outs confidential.

That said, gathered reporters were offered a rare look inside the Mississippi State playbook Wednesday with the help of overqualified tour guide/coach Joe Moorhead.

"I'm a Yankee, so I talk fast, just stop me if I need to slow down," Mississippi State's leader quipped as he started the presentation.

With the help of a slideshow and spliced game film, he delved into a number of concepts the Bulldogs will run this fall -- most notably the inside run.

From a meta perspective, the "graze" concept as he referred to it is a way for the Bulldogs to create a series of 2-on-1 matchups with the run-screen option.

Using pneumonic devices to aid his players, the plays are called "giraffe" and "gazelle," with the varying "l" and "r's" signifying a run to the left or right, respectively.

On Giraffe the Z, H and Y receivers line up on the right side of the formation, while the X receiver stands to the left.

For simplicity's sake, Moorhead focused on the two reads the quarterback makes in what is essentially a triple option -- one on the outermost defensive lineman toward the play side and a second on the defender on the second level of the defense if necessary.

With the quarterback in shotgun and the running back to his right, the first read is the defensive end against a standard 4-3 defense.

Moorhead explained the decision to hand off or run is made based on whether the quarterback sees the isolated defender's "number or decal." If the defensive end's numbers show, it indicates he is shutting off the edge -- forcing the quarterback to hand the ball off.

By contrast, if the defender's helmet decals can be seen, the defensive end will crash along the line -- thus opening up the edge for the quarterback to move into the second read of the play.

Once into the second level, the quarterback is faced with a singular defensive back as the H drifts to his right. The quarterback then forces the defender to commit to he or the receiver.

Moorhead also offered an addend that if the screen is open off the snap, the quarterback can throw the pass immediately -- a notion he called "activate."

"Activate is like a gift, you always take it unless you're a recruit," he said through a laugh.

In the passing game, Moorhead examined the over/under pass concept. Diagraming the "funnel" play, he explained the basic goal is to move the defense to one side of the field while simultaneously slipping a receiver under the coverage to the opposite side.

A pre-snap read gives Moorhead's quarterbacks a look at a vertical route from the Z receiver should the defensive back play up on him in man-coverage. If the defender backs off, the route becomes a comeback.

Moving inside, the H runs a 12-yard cross, the Y is sent on a deep-post and the X comes across the formation with a shallow crossing route, or "nasty" as MSU refers to it.

In all, Moorhead spent well over an hour explaining just two plays in the roughly 100-page binder he passed around the room -- one that included thorough breakdowns of what plays opponents run and against which defenses they do so.

Though it was not a complete delve into the secrets and intricacies of the MSU offensive agenda, the session did grant an exceedingly detailed look at the sheer number of pre and post-snap reads on every play from scrimmage.