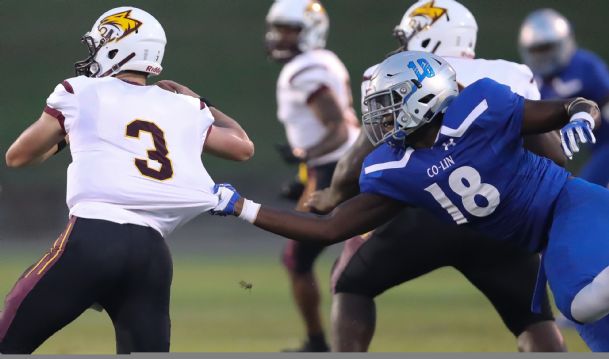 STARKVILLE -- While much of the country recovered from the July 4 holiday, the Mississippi State football program received news of its 22nd commitment for the class of 2020.

Davis, a rising sophomore at Copiah-Lincoln Community College in Wesson, had previously pledged to Tennessee before flipping to MSU. He will have two years of eligibility remaining after this season.

"Jordan is a kid that gives great effort and hustles and does all the things on the field that you'd want out of a kid," Copiah-Lincoln head coach Glenn Davis said.

A one-time Alabama commit, the towering edge rusher headed to Copiah-Lincoln after failing to qualify academically.

In his initial season with the Wolves, Davis flashed an advanced skillset in the pass-rush, while his run stopping ability continues to improve. In all, he collected 45 tackles and 2.5 sacks in 10 games.

Davis also boasts the physical tools to succeed in the SEC. Standing 6-foot-5 and weighing roughly 255 pounds, he has added between 30 and 35 pounds to his frame since arriving at Copiah-Lincoln.

"He's a guy that's still learning, still going to get bigger and stronger," Glenn Davis said. "Compared to where he was when he came here, he has made tremendous strides in the weight room."

Once in Starkville, Davis will be far from the only JUCO product donning the maroon and white. The Bulldogs listed 14 players on the spring roster that played in the junior college ranks. Of those, three are from Copiah-Lincoln -- seniors Jaquarius Landrews, Sh'mar Kilby-Lane and Tommy Champion.

"We've had a lot of kids go there through the years when Dan (Mullen) was there and even before that," Glenn Davis said of MSU. "And I think it's just been a situation where kids felt comfortable and I think it's a neat place for Mississippi kids to go to."

From a comparison standpoint, Glenn Davis said his latest talent reminds him of 2018 first round NFL draft pick and former MSU and Copiah-Lincoln standout Montez Sweat.

Though Davis is not quite the athlete Sweat is, the two share similar statures as Sweat comes in at 6-foot-6 and 260 pounds.

Speed aside, Glenn Davis believes Jordan is further along as a defensive end than Sweat was in his lone season at Copiah-Lincoln, as he played tight end in high school before switching sides of the ball during his freshman year at Michigan State.

Admittedly, there is still a year until Davis will suit up in Starkville. Despite his commitment, Glenn Davis believes his recruitment could carry on until the early signing period begins December 18.

That said, if Davis does sign with MSU come December, the Bulldogs may have their next great JUCO prospect in the fold.

"Wherever he winds up, if (MSU) is where he goes, he's going to be a tremendous player," Glenn Davis said. "I wish him nothing but the best from that standpoint. He's a kid who deserves it."

2. 'We can win wherever we go': An inside look at Mississippi State women's basketball's assistant coaching culture COLLEGE SPORTS