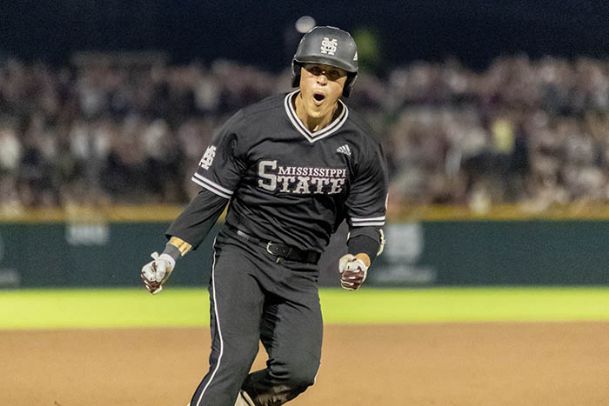 Elijah MacNamee is no longer allowed to openly admire his super regional handiwork -- at least not until his team's run in College World Series is complete.

The Mississippi State baseball senior right fielder has been showered with praise and support in the past three days since his all-too-fateful three-run home run in the top of the ninth inning Sunday that helped sink Stanford in what was the series-deciding Game 2 of the Starkville Super Regional.

Twitter and other varying social media sites exploded with videos and images of MacNamee's hit, bat-flip, prolonged celebration and first base umpire Frank Sylvester's disdain for it all.

But that is no more. MSU coach Chris Lemonis won't allow it.

"I walk in and he's watching the swing in the locker room a little while ago," Lemonis said through a grin Tuesday. "We have cut him off of watching that swing and talking about that swing. But I hope he's right back on track. If that doesn't get you going I don't know what will."

This isn't to say MacNamee's seemingly scripted feat Sunday should go unnoticed. Rather, it's that a there are larger goals at stake entering this weekend's College World Series -- goals of which MacNamee and, more specifically, his bat, are squarely a part.

Much has been made of the MSU offense this season, with good reason. The Bulldogs are hitting a combined .317 with 519 runs, 160 doubles and 63 home runs.

But three hitters, who have fought slumps or injury at some point this season, all seem to be getting hot just at the right time.

Take sophomore Rowdey Jordan, for instance. Following a March 19 game against Arkansas-Little Rock, the sophomore sensation was batting a slumping .151. In the time since, his batting average has soared, reaching as high as .303, before settling to its current .296.

Further, after finishing 7-for-13 with five RBIs a home run and a double against Southern University, Central Michigan and Miami, Jordan was named the Most Valuable Player of the Starkville Regional.

"It means a lot," Jordan said. "It was a big weekend, and we got three wins. I battled through some adversity at the beginning of the year. Being the MVP ... means a lot."

Then there's sophomore Josh Hatcher, who flashed an uncanny ability to drive the ball in the early stages of the season, going 10-for-17 with six RBIs over a six-game stretch between March 6 and 19.

His middle of his year was plagued by inconsistencies, though. He logged just 11 starts over his 21 appearances and dropped his batting average from .524 to .302 with a dismal 9-for-43 stretch.

Despite the midseason slide, Hatcher has found his groove of late. Starting 10 of the past 11 games, he has recorded six multi-hit contests and seen his average climb to .327 after bottoming out at .295 on April 26.

"It helps," Hatcher said of how starting every day has built consistency. "But even if that's not the case, you have to be mentally prepared every day, day-in and day-out. You have to get your work in. You have to know that your name is called you can step in there and do what you came here to do."

Finally there's MacNamee. The trials and tribulations of the senior's late season injury woes are well documented. A nagging foot injury was aggravated during a May 12 win over No. 14 Ole Miss. MacNamee would miss nearly three weeks of action.

Upon returning, he roped a handful of deep fly balls to the warning track during the regional and super regional, before ending last weekend with his three-run shot against the Cardinal.

With his home run now behind him, MacNamee is fully prepared boost the Bulldogs offense in Omaha.

"It's a team sport so when it comes to that my mentality is that I'm going to do anything to help this team win," he said. "It's like that at all times, but postseason I don't care how we get runs as long is says at the end of the day we have the 'W.'"