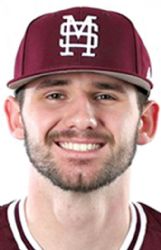 STARKVILLE -- Redshirt junior Ethan Small was named the National Pitcher of the Year by the College Baseball Foundation as a number of awards were shelled out to varying Mississippi State players Wednesday.

Small is the first Bulldog to receive the honor since its inception in 2009.

Small boasted a 6-2 record and a 1.48 ERA in 10 starts against ranked opponents. He also sits No. 1 nationally with 168 strikeouts on the year -- good for the No. 2 mark in MSU single-season history.

A first-round pick of the Milwaukee Brewers, Small became the 15th player in MSU history to be taken in the opening round of the MLB Draft earlier this month. He was the third MSU first round selection in the past four years -- joining Brent Rooker (2017) and Dakota Hudson (2016).

Junior Dustin Skelton was named to the second team.