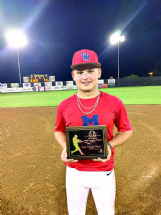 Pitcher Blayze Berry of Columbus earned most valuable player honors at the Junior Sunbelt Classic Championship in McAlester, Oklahoma, on Wednesday. He started the championship game on the mound for Team Mississippi, which beat Team Missouri 14-0.
Photo by: Courtesy photo

The tournament is one of the premier events in junior summer league baseball and included teams from six states and a Canadian All-Star Team.

He allowed just three hits and two walks while striking out seven. Berry also finished 1-for-2 at the plate.

He was named the tournament's Most Valuable Player for his efforts.

Berry is less than a month removed from helping Heritage Academy to its first ever Mississippi Association of Independent Schools Class 3A North Championship with a series sweep over Wayne Academy on May 17.

He totaled eight strikeouts in Game 1 of that series in a 101-pitch (71 strikes) outing.

Just a junior, Berry has one more year with the Patriots before he plans to join MSU coach Chris Lemonis' squad for the 2021 season.