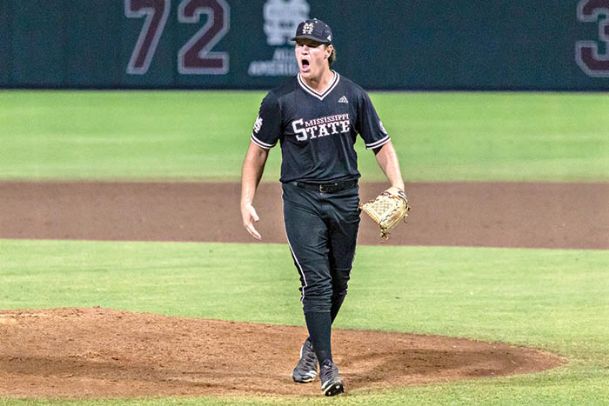 As the bottom half of the ninth inning in Sunday's Super Regional between Mississippi State and Stanford commenced, the deep melodic voice of Johnny Cash's "God's Gonna Cut You Down" blared over the speakers at Dudy Noble Field.

"You can run on for a long time.

"Run on for a long time.

"Run on for a long time.

"Sooner or later, God'll cut you down."

The tune has earned a cult following among MSU fans to a degree. It was previously the walkout song for Bulldog legend and current New York Yankee Jonathan Holder.

This past weekend Cash's ballad greeted a different name.

Just before the recording jumped into the first verse, senior reliever Cole Gordon walked out of the bullpen.

With Cash's words swirling around him, Gordon ran down the third-base line before stepping on the rubber. A handful of warm-up pitches followed.

It had been nearly one year to the day MSU crashed out of the 2018 College World Series by way of a 5-2 defeat to eventual champion Oregon State.

A teary-eyed Gordon was fully prepared for his baseball career to be over at that juncture.

With degrees in business administration and marketing, he had already sent resumes to several companies. Excel spreadsheets and a cubicle were just weeks away.

"I wouldn't say I was necessarily prepared (for life after baseball)," Gordon quipped. "But I would've taken it head-on and figured out where I went from there."

Yet in those immediate postseason weeks, Gordon furrowed his brow at the idea of adulthood. This was not the way his maroon-and-white-clad career would end.

"On my hands and knees," Lemonis said of how he begged the 6-foot-5, 244-pound reliever to come back.

Since enrolling, he has worked as a graduate service assistant in the Office of the Graduate School. He was named the Masters Graduate Service Assistant of the Year for his efforts and is scheduled to complete his MBA this summer.

"To come back I wanted to make sure I wasn't just floating around, not doing anything," Gordon said. "So, getting into the master's program, being able to do graduate school here, working, getting a job -- a graduate assistant position -- it's just all kind of fallen into place."

On the field, the season has been mildly erratic for Gordon. A steady bullpen arm through the first half of the year, flare-ups against Alabama and No. 5 Arkansas in back-to-back outings saw him allow eight runs on seven hits in 3 2/3 innings of work.

Since his ERA ballooned to 5.87 against the Razorbacks, it has steadily dropped to its current mark of 3.76.

Gordon's strikeout numbers have also climbed. He has recorded 30 of his 65 strikeouts this season his past 12 appearances -- an overall count that sits third on the team behind only redshirt junior ace Ethan Small and freshman JT Ginn.

Most notably, he soldiered through a five-inning, eight-strikeout affair in MSU's 17-inning win over LSU in the SEC tournament May 22.

"Every pitch in that situation, the game is on the line," he said at the time. "One mistake -- it turns the game. So I was just trying to go out there and make every pitch. From there the results are up to themselves."

Sunday, Gordon got things going in the ninth inning in as on-brand a way possible -- a strikeout -- fanning Stanford first baseman Andrew Daschbach on four pitches.

Cardinal second baseman Duke Kinamon earned the second out of the frame with a first-pitch lineout to senior center fielder Jake Mangum.

One out away from a return trip the CWS, Gordon began his delivery.

For years he had played out this scenario in the backyard. He would strike out the final batter and mayhem would ensue.

Back in reality, Gordon tossed a first pitch strike to Cardinal third baseman Tim Tawa. He backed it up with two straight balls.

Up 2-1 in the count, Tawa swung and missed at the fourth offering from Gordon. One strike away.

Gordon again set and fired. Tawa was fooled once more. MSU was heading to Omaha.

Slinging his glove, Gordon was almost instantly surrounded by his Bulldog brethren in dog-pile fashion.

He joked Tuesday he felt like he was going to die while stuck at the bottom of the massive mound of black-uniformed bodies.

Three-hundred-and-fifty-one days ago, Gordon thought he would watch that moment from a cubical somewhere in corporate America.

Instead, he has once more put his postgraduate career on hold -- at least for another week.

Besides, Gordon has business to attend to.

"We knew we had stuff we hadn't taken care of," he said. "We got to Omaha last year and we didn't close the deal. So, to have an opportunity to come back and try and finish that and to do something that's never been done here before (win a national title), it was just a hard thing to turn down."