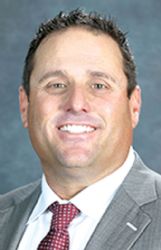 The NCAA announced Monday night MSU will take on Auburn at 6:30 p.m. Sunday in the first game of the teams' respective runs in Omaha.

The Bulldogs and Tigers previously met this season for a three-game set at Dudy Noble Field March 22-24. MSU took the final two games of the series after dropping the first, 6-5.

The rubber game of that series was a 20-15 slugfest.

Asked whether he feels as though Auburn is riding momentum into the tournament, MSU coach Chris Lemonis answered candidly.

"I think everybody feels hot right now," he said. "Everybody is ready to go."

"He's one of the main reasons we're going to Omaha," Lemonis said of Small. "So (we will line) him up and hopefully get as many starts as we can out there on proper rest.

Beyond Small, Lemonis' pitching plan has yet to be determined. Tuesday he did allude to senior Peyton Plumlee potentially starting the second game.

"We've got all our guys available, but Peyton's been really good too," he said. "So how we match up will be a big piece of it for how we (decide) our rotation."

Doctor's office is clearing out

Freshman JT Ginn is ready for action in Omaha.

Lemonis told the media he would throw Tuesday and that he was "fine."

Fans will remember Ginn was removed after three innings of work against Southern University in MSU's first game of the Starkville Regional with arm soreness.

The issue has been ongoing after first being diagnosed during a start at Tennessee April 7. Ginn lasted just one inning against the Volunteers before being replaced for precautionary measures.

Eagan suffered a "non-athletic injury," during game one of the Super Regional against Stanford and was hospitalized.

His status for the CWS is still unclear.