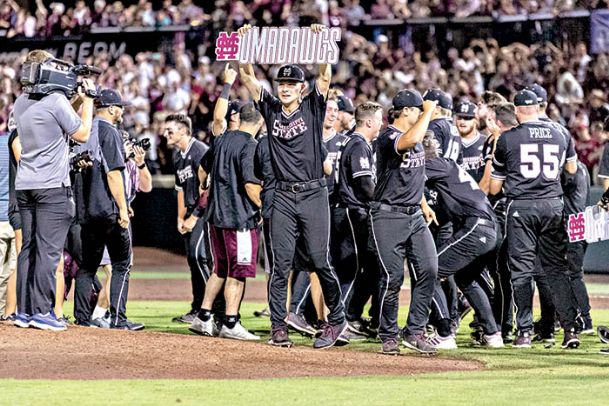 Mississippi State pitcher Peyton Plumlee hoists an âOmaDawgsâ sign on Dudy Noble Field after the Bulldogs earned a trip back to the College World Series on Sunday. MSU beat Stanford, 8-1, to sweep the Starkville Super Regional. Photo by: Chris McDill/Special to The Dispatch

STARKVILLE -- Mississippi State's 8-1 victory over Stanford in game two of the Starkville Super Regional Sunday read like a poem.

It ended with the Bulldogs punching their ticket to the College World Series for the second year in a row.

One night after he watched senior center fielder Jake Mangum rob Stanford's Andrew Daschbach of a grand slam in the first inning of Saturday's game one win, Skelton looked off toward almost the exact same spot in the right-center gap.

Seconds earlier, he uncorked on a 2-2 offering from Cardinal starter Erik Miller. He thought it was gone.

As it bounced off the top of the wall, he rounded second and stood on third with a bases clearing, go-ahead triple. MSU led 4-1.

"I was just thinking, 'Run my tail off and try and get to second base,'" Skelton said. "When it fell, I turned second, looked at the fans as I was going to third and I was just overwhelmed with how loud it was. I was trying to live in the moment."

Roughly two years removed from being suspended for the entirety of the 2018 season due to a failed drug test, Plumlee hurled 6 2/3 innings of two-hit ball.

His lone blemish came on a solo home run to Cardinal outfielder Kyle Stowers in the bottom of the first inning. It was all Stanford would get.

He went on to retire 10 straight batters between the fourth and seventh innings.

In the bottom of the seventh, he handed the ball to MSU head coach Chris Lemonis and wandered off the mound at Dudy Noble Field for the final time to the tune of a standing ovation.

"The amount of support (the fans) bring to us, you can't do anything else but compete your butt off and try to win in front of them," Plumlee said.

After senior Jared Liebelt bridged the gap between Plumlee's exit in the seventh inning, the ninth brought the closing home acts of Mangum and seniors Elijah MacNamee and Cole Gordon.

Standing in the batter's box for what would be his final official at-bat in Starkville, Mangum wasted no time. The SEC's all-time hits leaded roped the first pitch he saw from Stanford reliever Will Matthiessen into left field.

Perched upon first base with a leadoff single, Mangum blew a kiss to the maroon and white faithful.

"My first ever hit at Dudy Noble was the same as my last -- the six-hole," he said. "Of course it was the first pitch, too."

MacNamee stepped to the plate two batters later with one out and the bases loaded. Struggling of late, he entered the at-bat 0-for-7 against the Cardinal in the super regional.

MacNamee quickly jumped out to a 3-0 lead in the count. A foul tip and an ugly swing at a ball in the dirt ran the count full.

His last swing, though, brought the crowd to its feet.

With the cracking sound of metal on leather and a bat flip that nearly cleared Stanford catcher Maverick Handley's head, MacNamee put the Bulldogs ahead 8-1 courtesy of a three-run home run into the Left Field Lounge.

"All week he said God's got him -- stay with God and good things will happen." Mangum said of his classmate. "He's got him."

Finally, it was Gordon's turn.

The graduate senior nearly walked away from the game after last season's run to the College World Series. The coaching staff convinced him otherwise.

A dogpile on the pitcher's mound was the first order of business.

The celebration continued with a victory lap around the outskirts of the playing surface.

As the Dudy Noble crowd cheered for their beloved Bulldogs on the field down below, The Four Season's tune "December 1963 (Oh, What a Night)" echoed over the stadium speakers.

For the second time in as many seasons, MSU was headed to the College World Series.

"Man if you think I can put that into words you're crazy," Mangum said. "You can't write anything better."