A special night for Peyton Plumlee 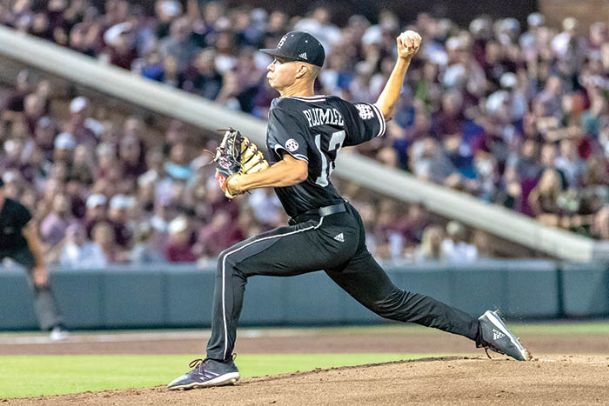 Mississippi State pitcher Peyton Plumlee allowed a run on two hits in more than 6 innings of work Sunday during the Bulldogsâ 8-1 win over Stanford to take the Starkville Super Regional. Photo by: Chris McDill/Special to The Dispatch

STARKVILLE -- Strolling off the mound in the seventh inning of Sunday's 8-1 win over Stanford in game two of the Starkville Super Regional, senior starting pitcher Peyton Plumlee looked to his left and then to his right.

After taking in the scene, Plumlee buried his head in his cap as he neared the Mississippi State dugout, exiting his last game at Dudy Noble Field.

From a distance it looked as if he muttered a few words to himself. Rather, he was coping with the moment.

It's been nearly two years since Plumlee was suspended for the entirety of last season due to a failed drug test in June 2017.

All he could do was watch as last year's Bulldogs made an improbable run to the College World Series.

Sunday night, Plumlee channeled that feeling of helplessness and his desire to drive the Bulldogs toward a title, silencing the Stanford bats en route to a Super Regional sweep and a second straight trip to Omaha, Nebraska.

A contact pitcher by trade, the Cardinal is a bad matchup on paper for Plumlee. Stanford coach David Esquer's bunch entered the weekend tied for 14th in the country in home runs courtesy of double-digit offenders Brandon Wulff (19), Andrew Daschbach (17) and Will Matthiessen (12).

Stowers reminded Plumlee of the Cardinal's power-hitting propensity on the third pitch he saw with a leadoff, solo home run over the left-center field wall in the bottom of the first inning.

"After that, I knew that if I let my emotions get the best of me, Stanford, as good as a club as they are and as good as hitters they have, they would eat me alive," Plumlee said. "I took a deep breath, I looked around, I took in the moment and I just told myself, 'This is not how I'm going out.'"

With his emotions in check, he soldiered on, allowing just one run on two hits, while striking out six in 6 2/3 innings.

"The biggest thing with Peyton, like he said, is that he was not really great early," MSU coach Chris Lemonis said. "Then, he found it. He just did not give in and he kept making pitches."

Following his season-long disqualification in 2018, Plumlee debated leaving MSU. Instead, he decided to stay if first-year head coach Lemonis and his new staff would have him.

Plumlee has returned the favor with a 7-4 record and a 3.67 ERA in 81 innings pitched this year.

"We got him back in the fall and he had not played in a whole year," Lemonis said. "He was not really good in the fall. He came out in the early season and was pretty good. Then, he struggled. He has kept fighting."

Sunday, Plumlee added a new tale to his ever-growing comeback story, helping MSU to its second-straight College World Series appearance. The final chapter? That has yet to be written.

"Everything I did to get back to this point was for this moment, to get back to Omaha and to give our fans a National Championship -- which is what we are looking to do," Plumlee said. "For all that to actually happen and come into place is surreal."