Slimantics: For Bulldog fans, a long day's journey into night 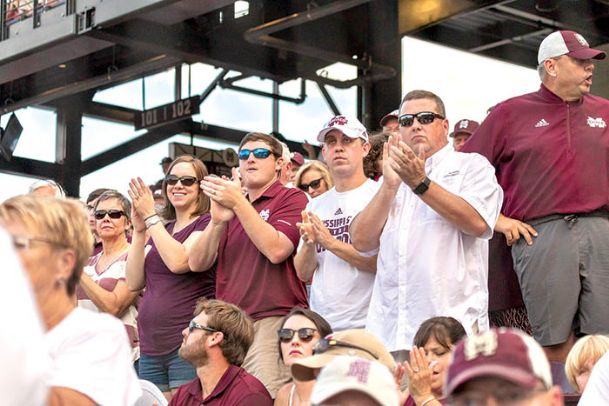 Mississippi State baseball fans cheer during Saturdayâs NCAA tournament Super Regional contest versus Stanford at Dudy Noble Field. Originally scheduled for 2 p.m., weather threats delayed the first pitch to 7, meaning fans who arrived in the morning to get in line had to wait eight to 12 hours for game time. Photo by: Chris McDill/Special to The Dispatch

Bulldog fans wait outside the right field entrance at Dudy Noble Field Saturday for the gates to open for Mississippi State Universityâs NCAA Super Regional game against Stanford. Some fans arrived as early as 7 a.m. for a game that was delayed until 7 p.m. due to weather concerns.
Photo by: Slim Smith/Dispatch Staff

A group of men sat under the awning of an RV parked south of Dudy Noble Field, snacking, having a few adult beverages and listening to the radio as Arkansas laid the wood to Ole Miss, which met their approval, rivalries being what they are.

The RV had arrived Friday evening, joining about two dozen other RVs that will be parked through the weekend, perhaps beyond, as Mississippi State battles Stanford for the right to advance to the College World Series.

It's a considerable investment in time, energy and money for these season-ticket holders, but the man they all acknowledged as the most committed of fans was just then strolling in their direction.

Dennis Everett, known well and simply as "Snoot," traces his ties to MSU baseball back to when he was a student at MSU in 1976. One of the first denizens of the slice of baseball bohemia known as Left Field Lounge, Everett has watched MSU from its rustic beginnings to its current status as one of college baseball's elite programs.

"When we started, you just backed up your truck to the outfield fence before the game," he said. "Things sort of took off from there."

He rarely misses a game, especially come NCAA playoff time. He goes to Omaha for the College World Series every year, whether the Bulldogs make it there or not.

But on this Saturday, Everett would make no claim of superior devotion.

Sitting in the comfort of the shade, well-stocked with refreshment and food, Everett pointed in the direction of the right-field entrance to Dudy Noble Field to a group of 100 or more fans sitting in the sun, waiting for the gates to open.

"Those people over there? That's what you call committed."

Rick Felder drove down from Olive Branch early Friday morning and claimed his spot at the front of the gate at 7 a.m.

By 10, the lines awaiting the opening of the stadium were filled with Bulldog fans, waiting to get into the ballpark. The gates open two hours prior to the start of the game, so even the "later arrivals" had assembled a full four hours before game time.

The fans were waiting for the only seats available, general admission seats in the two outfield berm areas along the right and left field lines. Think of it as baseball's version of the Oklahoma Land Rush. First-come, first-served for the best vantage points.

At 9:30 a.m., NCAA and Mississippi State officials met to discuss the weather on a day when the forecast seemed especially poor for baseball. At 11:30, the announcement went out. Game time had been changed to 7 p.m.

It was at that point that a funny thing didn't happen. Nobody budged from their positions in line.

"That's the way it goes, I guess," Felder said. "I guess they know something we don't know. All I know is I'm here and I'm going to stay here."

It was the same story all down the line of fans.

"I never thought about leaving," said Jeff Loney, 57, who wore a big brace on his left knee and calmly endured the heat and discomfort. "My middle son came down from Nashville for this, so there's no way we were leaving."

Fans did improvise, though, holding each other's spots as fans made food runs to fast-food restaurants and convenience stores. Some had the forethought to bring a book to read, other struck conversations with their neighbors, making new friends as the hours passed.

Phillip and Kelly Carter drove up from Hattiesbug and were in line by 9:30.

"We thought we might have to wait, but nothing like this," Phillip said. "Fortunately, we've had a couple of folks here in line, so we can kind of come and go in shifts."

Much has been made of the devotion of Bulldogs fans. MSU regularly is among the nation's leaders in attendance. But waiting outside a locked stadium 10 to 12 hours before the game starts is commitment on a different scale.

"That's Mississippi State fans for you," Carter said. "Nobody else would do this. I take it back. LSU fans would. They're crazy, too."

Most fans treated the change in game time as a minor inconvenience. For one person, it was even an opportunity.

At around 1 p.m., Bill Waller Jr., Republican candidate for governor, arrived, working up and down the line of fans, shaking hands and handing out "Waller for Governor" stickers.

"It's a captive audience, huh?" said Waller, who was a student at Mississippi State when his father was elected governor in 1971. "I should have prepared a speech. Seriously, though, it's great to be back on campus."

The same could be said of "Snoot," whose devotion has never wavered even if his perspective has.

"I tell these young people, 'Look. You may win. You may lose. That's baseball. But either way, we're going to win the party. Don't take it too serious. It's supposed to be fun.' "

The long delay? No problem, he said.

"It just means we got an early start on the party," he said.