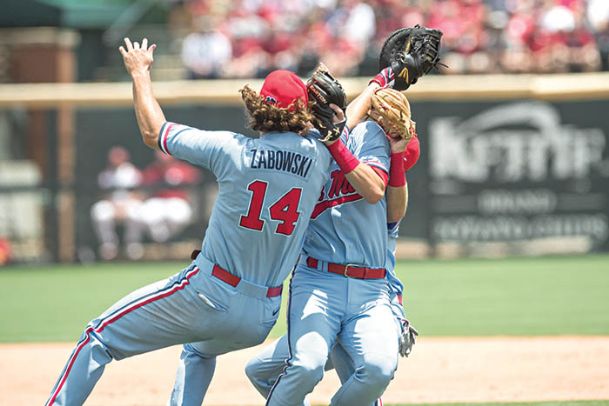 Mississippi Rebels first baseman Cole Zabowski (14) collides with shortstop Grae Kessinger (center) and second baseman Jacob Adams (back) while going for a pop up fly ball during the game against the Arkansas Razorbacks at Baum-Walker Stadium Photo by: Brett Rojo-USA TODAY Sports

FAYETTEVILLE, Ark. -- The No. 5 overall seed Arkansas Razorbacks owned the day at Baum-Walker Stadium, taking Game 1 of the NCAA Fayetteville Super Regional, 11-2, over the No. 12 seed Ole Miss Rebels.

Ole Miss struck first on a solo home run in the first inning by Grae Kessinger, but it was all Hogs from then on out. The Arkansas lineup jumped on Will Ethridge, snapping a string of three straight appearances with two runs or fewer allowed by the Rebel ace.

Meanwhile, Isaiah Campbell was terrific on the day for Arkansas. The second-round MLB Draft pick went a career-high 8.1 innings with two runs allowed on five hits, striking out seven and walking just one. Ole Miss' only two runs came on solo shots by Kessinger and Thomas Dillard in the first and ninth innings, respectively.

Ole Miss started on a positive note offensively thanks to Kessinger. The All-American shortstop launched a one-out home run into the Hog Pen in left to give the Rebels an early 1-0 lead.

The Razorbacks answered right back in the bottom half, first stringing together three hits to tie the game at one. Ethridge posted a pair of big strikeouts in the inning, but Jack Kenley gave Arkansas a 4-1 lead on a three-run home run with two outs.

In the second, the Rebels got a two-out walk from Cooper Johnson before Anthony Servideo barreled up a ball from Campbell, but his line drive tailed right into the glove of Casey Martin at shortstop to end the inning.

Meanwhile, the Arkansas offense continued to attack in the second. An error followed by a double put runners on second and third with no outs. A Martin sacrifice fly and an RBI groundout by Matt Goodheart made it 6-1, Hogs.

Thomas Dillard singled with one out in the third, but the inning ended on a strike-'em-out, throw-'em-out double play. However, Ethridge bounced back and put up a much-needed zero, working around a leadoff walk to keep the gap at five.

The Rebels created some hope again in the fourth with a leadoff base hit by Tyler Keenan, but a strikeout and a double play ended the scoring chance. Arkansas ended Ethridge's day in the fourth after a hit by pitch and an RBI single by Martin made it a 7-1 game. Tyler Myers checked in, and the Razorbacks kept hitting, as a Goodheart home run made it 9-1 before the Rebels got a four-six-three double play to end the inning.

The teams traded scoreless fifth innings. Myers worked his way around a two-out base hit, striking out Christian Franklin to end the inning.

Conway, Arkansas, native Jacob Adams opened the sixth with a leadoff base hit, but he made it no further as the Rebels were then retired on three straight outs.

The Razorbacks added another run on a Trevor Ezell home run to start the sixth. Then, after a Goodheart single, Ole Miss went back to the bullpen, bringing on Kaleb Hill to relieve Myers. The freshman out of Pine Bluff, Arkansas, got one out, but gave up a single and walked a pair to give way to Max Cioffi, who got an inning-ending flyout.

Ole Miss went down in the seventh on three straight pop-ups. It looked like the Razorbacks might add another in the bottom half, but Ryan Olenek robbed Ezell of what would've been his second home run of the day, going up and pulling the homer back in straightaway center field on a SportsCenter Top 10-caliber play.

Dillard added one home run for the road in the ninth, but it was too little, too late for the Rebels.

Ole Miss now must win the final two games of the series to book a spot in the College World Series. Game 2 is set for 2 p.m. today on ESPNU.