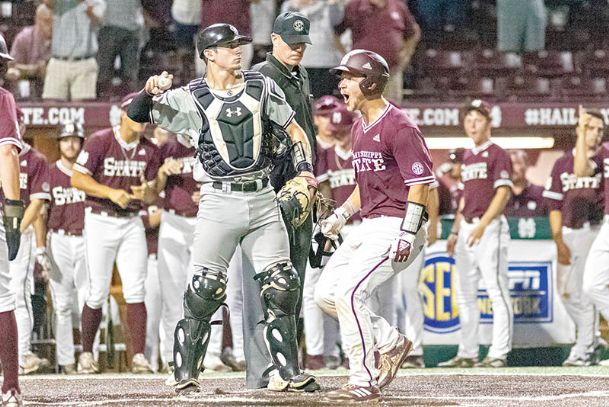 Mississippi State junior catcher Dustin Skelton has provided a spark in many ways for the Bulldogs by starting 50 games at catcher this season. He is a key reason why MSU (49-13) earned a No. 6 national seed and is prepared to play host to No. 11 national seed Stanford (45-12) at 2 p.m. Saturday in Game 1 of the NCAA Tournament Starkville Super Regional. Photo by: Chris McDill/Special to The Dispatch

STARKVILLE -- Dustin Skelton had a battle on his hands.

After splitting time at catcher with Marshall Gilbert last season, the position was up for grabs at the start of the Mississippi State baseball team's 2019 season.

With Chris Lemonis taking over the program from Gary Henderson, Skelton had fresh opportunity.

"I just wanted to come out here and impress the new coaching staff," he said. "Really that was the only thing on my mind."

Skelton has made quite an impression. The 6-foot, 202-pound junior from Olive Branch has started 50 games at catcher this season. His other four appearances came at designated hitter. Gilbert, and freshman Hayden Jones and Luke Hancock have combined for 12 starts at catcher.

Skelton's play has been a key reason why MSU (49-13) earned a No. 6 national seed and is prepared to play host to No. 11 national seed Stanford (45-12) at 2 p.m. Saturday in Game 1 of the NCAA tournament's Starkville Super Regional. The winner of the series will advance to the College World Series in Omaha, Nebraska.

Shifting between the No. 5 and 6 spot in the batting order, Skelton has provided consistency between sophomores Justin Foscue and Rowdey Jordan. He is batting .308 with 50 RBIs and 10 home runs in 54 starts. When Skelton bats in the No. 6 hole, MSU is 19-3.

A tweak to his batting stance has helped Skelton raise his average 70 points from last season. Working with hitting coach Jake Gautreau, Skelton added a slight leg kick. As the ball approaches during an at-bat, he taps his front toe back toward his body to help load his swing and to set his timing.

"I always knew I had power, and that toe-tap is allowing me to stay in my legs and get to (the ball)," he said.

Defensively, Skelton is fifth in the Southeastern Conference in steal attempts against and is tied for first in the with 19 runners caught stealing

Beyond the aforementioned ability, he pointed to volunteer assistant Kyle Cheesebrough's scouting work as an added influence. During games the two trade signals on which runners may attempt a steal --affording Skelton a slight heads up.

In the first inning of the Bulldogs' 11-6 victory, Jaguars second baseman Johnny Johnson struck out on a 1-2 pitch from freshman starter JT Ginn. Skelton then shot out of his stance and fired to Foscue at second base. Standing on the bag, Foscue awaited a stumbling Tyler LaPorte, who was at least an arms-length behind the throw.

"That kid is really fast and I knew when I got him by four or five steps, 'Hey yeah I got you,' " Skelton said.

His skills were validated Wednesday afternoon, when the Miami Marlins selected him in the 18th round of the Major League Baseball First-Year Player draft.

Originally taken out of Magnolia Heights in the 36th round, Skelton said there was little incentive to skip college given where he was drafted. Even now, with a professional contract in tow, Skelton is most concerned with helping the Bulldogs to their second-straight College World Series appearance.