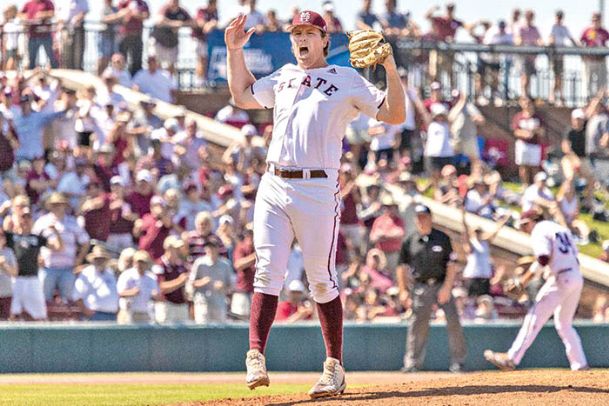 Cole Gordon has sliced his earned run average up from 5.79 on April 28 against Georgia to 3.96 following MSUâs victory against Miami on Sunday. Photo by: Chris McDill/Special to The Dispatch

The Bulldogs had just scored 34 runs against the No. 3 team in the country. But while the offense thrived, the bullpen faltered. In the final two games of the three-game set, the bullpen allowed seven runs in the final two innings -- including four in the ninth of a 6-5 victory April 28.

Since then, the bullpen for No. 6 national seed MSU (49-13) has become one of coach Chris Lemonis' biggest weapons entering the NCAA tournament's Starkville Super Regional against No. 11 seed Stanford (45-12). Game 1 will be at 2 p.m. Saturday (ESPN2) at Dudy Noble Field.

MSU has four relievers who can shoulder the load -- all of whom were selected this week in the Major League Baseball First-Year Player draft.

Seniors Cole Gordon and Jared Liebelt have saved their best for last as they hit the final stretch of their MSU careers.

Gordon has sliced his earned run average up from 5.79 on April 28 against Georgia to 3.96 following MSU's victory against Miami on Sunday. His 11 saves are tied for fifth in the Southeastern Conference.

His six-out save against Southern on May 31 and a five-inning outing against LSU on May 22 in the SEC tournament have offered insight into his longevity once entered into a game.

Liebelt is the only other player on the roster with a save (five), while his 2.74 ERA is the best of any reliever with 12 or more appearances.

White has topped out at 97 mph. He mixes a fastball, a changeup. Barlow is one of two left-handers who has seen a lot of work out of the bullpen. His workload may decrease because Stanford has only two left-handers in its projected starting lineup.

James, a starter for the first part of the season, has seen his workload diminish as senior Peyton Plumlee has been strong in starting performances as the team's No. 3 starter. In that time, James has made nine of his last 11 appearances in relief.

Eagan is the other left-hander alongside Barlow who could see action. He boasts a 3.09 ERA in 23 1/3 innings.

Cerantola is a 6-foot-5 freshman whose fastball is on par velocity-wise with White's. He struggled through the middle portion of the season but was a steady presence in games against Louisiana Tech, South Carolina, and LSU in the final few weeks of the regular season.